The Legend of Lake George

The following is a copy of an article found in the 1963 Sesquicentennial Edition of The Post Star, in Section 5, on page 7.  It gives us an opportunity to remind our readers and friends that the Warren County Historical Society has copies of Jon Bower’s book, Legend of Lake George, El Lagarto, for sale:  Hardcover $45. Softcover $30.  Contact the Society for information:  518-743-0734 or [email protected]

George Reis and His El Lagarto of Boating Fame

An elongated, cigar-shaped craft that defied description and a resourceful and courageous Warren County sportsman combined some 30 years ago to create a sensation in the world of speed and set a record that has yet to be matched.

This, of course, would describe the famed craft, the El Lagarto, and its owner-driver, George Reis of Bolton Landing, who not only won the world-famous gold Cup Race once, but on three consecutive occasions to bring world-wide acclaim to Lake George and Warren County.

While millionaire sportsmen of the nation and automotive and boating industrialists poured hundreds of thousands of dollars into the creation of super-craft back in the early 1930’s. Reis took a “loser” pf a 1922 Gold Cup competition and through his brilliant mechanical skill converted it into the three-time winner, the El Lagarto.

Reis and the El Lagarto captured the Gold Cup crown in 1933 at Detroit, again in 1934 at Lake George where the race was staged for the second time in its history and for the third time in 1936, also at Lake George, to flabbergast the world of speedboat racing.

Although no novice in Gold Cup racing, as he had competed in the event previously, Reis’ efforts were virtually a one-man affair, although he got a lot of help form his aide, broker-mechanic Dick Bowers of Bolton Landing, in carrying out his plans.

His first taste of Gold Cup competition came around 1920 when he drove the craft, Hawkeye, for the Lake George Syndicate, but the boat couldn’t take the long and rugged grind and finished well back.

Later, he took a liking to the style of a gold cup craft called Miss Mary, a 125-hp racer, and acquired her.  Reis worked long, hard hours on making her a thoroughbred – installing a 380-hp Packard motor, fitting her out with shallow-type steps underneath instead of the plain V-type bottom and putting 101 various little touches here and there on her motor and structure.

The work paid off handsomely, astounding the racing world.  To reveal Reis’ ingenuity, as the hour of the 1934 race at Lake George neared, something went wrong with the El Lagarto’s water pump.  Reis simply borrowed a few parts from the family lawn mower and the El Lagarto was in business.

One thing that adversaries found after clashing with Reis and the El Lagarto – you simply can’t match Yankee ingenuity, knowledge, driving skill and courage and love of speed racing with plain money.

George Reis and the El Lagarto will go into the books as one of the great world championship  combinations. 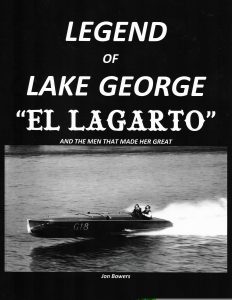 All photos are from the book by Jon Bowers pictured here