North on Glen Street in Glens Falls there are three streets that are unique to others.  Lincoln, Coolidge and Horicon Avenues are wider than most and also have very attractive homes.  This area  seems to be historically younger than other city neighborhoods.  According to residents, there are stories about the area having a mile racetrack, faster and better than any other in the United States!

In 1869, the Warren County Fair was conducted outside the village limits, with horse racing as a main attraction.  A tract of twenty-eight acres was purchased and developed by the Warren County Agricultural Society.  Support buildings, a half- mile oval track and a grandstand to accommodate 2,000 people were developed.  This land was located west of Glen Street.  It was bordered on the south by Dixon Road and Lincoln Avenue; on the west by that portion of Dixon Road now known as Kensington Road, and on the north by the area that is now Horicon Avenue.  The parcel was used for county fairs for many years until the MILE TRACK was built. 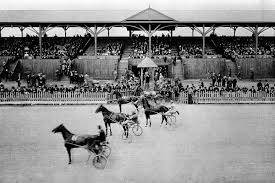 Arthur W. Sherman and R. A. Little bought the fairgrounds property for $18,000 and, in 1890, built the Glens Falls MILE TRACK.  At the same time, the gentlemen formed Coolidge Avenue and Horicon Avenue as residential development.

Racing got a big boost with the founding of the Northern New York Trotting and Horse Breeder’s Association in 1887.  By 1891, almost all of the leading horse breeders of New York State and Vermont belonged to this organization.  Major races were held during the meets sponsored by the association during August.  The Glens Falls track was very popular with horse owners as it was very fast and thus it regularly attracted thousands of race fans.  A spur of the Glen Street trolley line was extended up Lincoln Avenue to accommodate the traffic to the races.  Footpaths were no longer on Coolidge and Horicon as the spectators created wider roads for foot traffic and horse-buggies.

Then, on September 10, 1898, came the track’s greatest event. The best horses of the day were ready to go in three heats.  Several national newspapers declared that this was to be the greatest turf event the world has ever known.

In the first heat, the horses were “neck to neck,” and John R. Gentry crossed the line at 2:01  ½, and Star Pointer, timed at 2:01 ¾.  The hot pace between the two trotters continued in their second and third miles but the meet’s record remained at 2:01 ½.

So what happened next?  Where is the racetrack?

The Grand Circuit was the major league of harness racing with dozens of tracks throughout the United States.  The races showcased the country’s top trotters and pacers.  In 1901, the circuit’s schedule moved Glens Falls to mid-September coinciding with another top meet at the Empire Track in New York City.  In 1902, the track was not used and eventually fell into disrepair.

The glory days were over.  The barns and the grandstand were demolished, and the land was divided and houses were built.  By 1920, many homes were built along the wide streets that accommodated the race traffic and the racetrack land became “Broadacres.”

The records set at the Glens Falls track were significant because of its timing.  Star Pointer went on to break the two minute mark with a 1:59 1/4 .  Today at the Saratoga track, 1:55 is good and the North American record stands at  1:48 4 held by Homicide Hunter.

If one looks up Broadacres on Google maps, it is evident (even today) that there was a race track in the area.  Drive up Lincoln or Coolidge and wander around Broadacres. Use your imagination to remove the houses and then add hundreds of horses and thousands of people.

This article was researched and written by Eloise O’Neil, a volunteer at the Society.  If anyone is interested in writing columns for the Rewind post, please contact the Society at 518-743-0734.