A short-lived, rough and tumble sport that rolled into the city in 1908

In the Spring of 1908 sports fans in Glens Falls had many choices: football, baseball, or the far newer sport of basketball. Even with all these local and national favorites, it is likely that they were pleased when another new sport was added to the lineup:  roller polo. Invented in England during the 1870s, it first appeared on this side of the Atlantic ten years later and since then had been steadily spreading across the country. 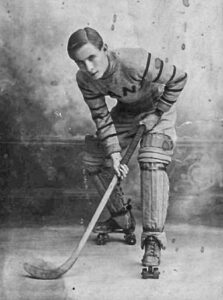 Played on roller skates by five-man teams, players used a curved stick not much thicker than a gentleman’s cane to maneuver a baseball-sized red ball into their opponent’s goal. Held one-handed, the stick was equipped with a leather strap at the top to prevent it from being knocked away. The goals were three-foot-tall baskets, six-foot-wide set four feet from each the end of the rink. While the regulation rink was eighty by forty feet, the size would vary depending on the facility where the game was played. Often chicken wire was strung at each end of the rink to protect spectators from wild shots.

The games were fast and rough, with three fifteen-minute periods where almost anything was allowed short of tripping or hitting with the stick. In the New York roller polo rule book, a foul could be called for “unwarrantable interference,” or for a player “acting in an ungentlemanly manner sufficient to attract the attention of the audience.”  The uniforms were wool jersey shirts and leggings with their team colors and shin guards and heavy gloves for protection. By the time roller polo came to Glens Falls, the rules had been modified allowing goalies to wear masks and chest padding. The skates used for roller polo had four wooden wheels and were strapped to the player’s shoes. 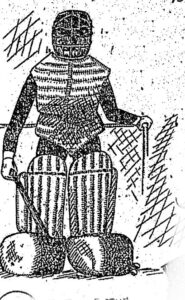 The New York State Roller Polo League was formed in October of 1908 with plans to organize eight teams across Eastern New York. The first cities to step up were Albany, Syracuse, Schenectady, Troy, Cohoes, and Amsterdam. By November 6th when the Glens Falls Daily Times announced the opening schedule, Syracuse and Troy had dropped out and Glens Falls was added, making it a five-team league.

The players for Glens Falls were all from New England, with Alex Besse of Plymouth, Massachusetts, and Charles Turner of Westerly, Rhode Island as rushers, Frank Dalton of Pawtucket, Rhode Island at center; Bert Warner of New Haven, Connecticut at halfback, and Albert Knowlton of Meriden, Connecticut at goal. Many of these men were minor league baseball players who were using roller polo to stay in condition during the off-season.

The 1908 season opened the evening of November 11th, 1908, at the recently completed Miller Brother’s rink on Maple Street in Glens Falls. The home team faced off that night against Amsterdam before an enthusiastic crowd of four hundred spectators. Mayor Cool was given the honor of placing the ball in the center of the rink to start the contest. The first period ended with the teams tied at ten goals each, but then Glens Falls pulled ahead in the second period. The Glens Falls Daily Times praised Alex Besse, at the position of first rush, for shooting three out of the four goals and being “everywhere at once, especially in the right place at the opportune moment.”  For his final goal of the period, he had taken the ball through the entire opposing team and scored before anyone had time to react. In the third period, each team scored one more time, with Glens Falls taking the match.

By late November Glens Falls held second place in league standings, four games behind Albany, but only one ahead of third place Amsterdam. When Albany rolled into Glens Falls for a night game on November 30th, the home team had reason to anticipate a win. Earlier in the week, the Albany Senators had been given their first defeat of the season by Amsterdam and Glens Falls planned on doing the same that night. Unfortunately, Albany defeated Glens Falls, a loss that started a downhill spiral for the team that continued for the rest of the season. The two met again two weeks later in a contest that Albany dominated by a score of 14 to 5, The Albany Argus had this to say about the rough and tumble play that night:

Despite the efforts of the visiting quintet to rough house it, the game was fast and snappy from gong to gong. Warner’s five proved a little too crude in the finer points of the game to hope to snatch a victory, although they possessed enough bulldog spirit to make the Albanians move faster than a marathon runner.

The demise of Glens Falls continued when just days after their defeat by Albany, two of their best players, Besse and Warner left the team and were picked up by Cohoes. In what was likely the last contest for Glens Falls, they were beaten 9 to 4 by Schenectady in an away game. 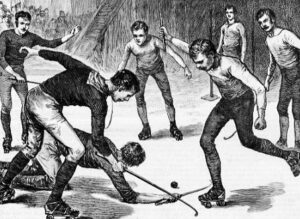 With attendance lagging throughout the league, on December 27th it was decided to cancel the remaining games. To determine the season champion, the first-place Albany Senators would play a five-game series against second-place Amsterdam Carpetbaggers. By the end of this series, Albany had prevailed over Amsterdam, with the victory closing the doors of the short-lived New York Roller Polo League. The next year the Empire Roller Polo League was formed, this time also including teams south of Albany in Hudson and Newburg. While Glens Falls tried for a spot in the league, their application was never approved, ending organized roller polo in the city.

The photograph of the roller polo player is from hockeygods.com, the drawing of a goalie from the December 28, 1908, Albany Argus newspaper and the image of a roller polo match is from the September 6, 1883, issue of Harpers Weekly.

Sources for this article are online newspaper archives at nyhistoricnewspapers.org and fultonsearch.org, as well as Henley’s Official Polo Guide of 1886 at archive.org.