If you grew up in Glens Falls in the 1960’s and ‘70’s, you remember the many summer playgrounds that were mainstays of the neighborhoods around the city.  Some were anchored to schools, some to parks.  All were centers of fun and recreation for city children, pre-teens, and teens during the hot summer months.  Local teenage and college-age “Playground Leaders” — Recreation Supervisors, with Assistants – were managed by the City Recreation Commissioner.

Open from 12 noon to dusk, Monday through Fridays, the playgrounds were gathering places for kids – in their own neighborhoods, close to home.  A sense of belonging, new friendships, and adventure – or simply a safe place to hang out – were free for all.

Perhaps the most beloved Superintendent of the Recreation Department was Dan Reardon, who gave his all to the kids of Glens Falls, and could regularly be seen on cold winter nights holding a hose at Crandall Park, flooding the park for ice skating.  His son, Champ, was a well-known figure, too, and both cared deeply for the care and maintenance of the playgrounds, ball fields, tennis courts, basketball courts, and picnic areas around the city.

By the mid-1970’s, Doug Neely took the reins as Superintendent of the Recreation Department, and he was aided by Tom Harrington, who was the hands-on supervisor of the playgrounds, visiting each one on a daily basis to support the playground leaders and take care of any disciplinary or safety issues that arose. 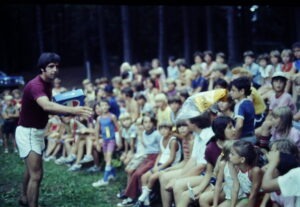 Each playground leader and his/her assistant were charged with developing a full array of daily activities for the kids, including sports, games, arts and crafts, music, field trips, and more.  Each location also had enrichment programs in sports, as well as arts and crafts, led (in the ‘70’s) by Bill Palmer and Gerri Groff, respectively. 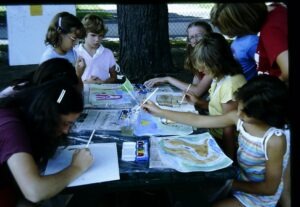 This group of kids are participating in a craft activity.

Once a week, the children and teens from the school playgrounds were bused either to Haviland’s Cove or East Field for an afternoon of swimming.  By the late ‘70’s several of the locations also offered free lunches, too.  Local radio station WWSC offered a rundown of the activities at all the local playgrounds each morning at 7:40am, hosted by DJs Bruce Matthews or Kip Grant.

On Thursday mornings at 10 am, the playground staff members would convene at Crandall Park for their weekly meeting, where announcements would be shared, weekly playground plans (like lesson plans) turned in, and paychecks distributed.  Training on relevant topics would also be provided; one of the favorite speakers was Sgt. Isabelle Loveland from the Glens Falls City Police Department, who would teach about how to handle unruly kids, fights, and suspicious persons on the playground. 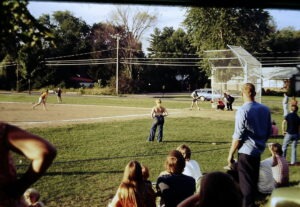 A favorite activity was the sports events, especially softball

The “60’s and ‘70’s may have been the heydays of the city playgrounds – before cellphones, tablets, and video games.  They certainly were good times to remember — when kids made their own fun, when boredom led to creativity, when Kick-the-Can, 4-Square, and making lanyards led to new friends, and kids walked or rode their bikes to the playground and stayed outside until dark.

The dedicated playground leaders were friends and mentors to the youngsters, and fond memories were made that lasted a lifetime. Hometown summers, hometown fun.