The Many Wives (and Families) of John Miner

In his research, our friend and regular contributor found an interesting story  to share with our readers.

If John Miner were alive today, he would likely be on afternoon television being confronted by Dr. Phil over his seemingly endless life of bigamy. It was a story that newspaper reporters of his day dug into with great vigor, and very likely adding embellishments along the way that often seemed close to a dime store novel than the reporting of news.

How the thirty-year-old Mary Jane Campbell came to meet John Miner is unknown. There must have been something that attracted her to this man over twenty years her senior, as in 1880 the two were married. Mary Jane was the oldest child of Samuel and Fanny Campbell. The Campbell’s owned a farm in Putnam, Washington County, not far from the northern end of Lake George. The family farm, said to be worth $1,600, which passed into Mary Jane’s hands soon after she was married, was quickly mortgaged by her new husband for his personal benefit.      Having obtained these funds, John began to disappear for long periods, finally abandoning her completely.

News of this marriage, when it finally made its way to the ears of one of his other families, set in motion a series of events that revealed John Miner’s secrets, a story that we will now attempt to unravel from the beginning.

John Miner, (his name was sometimes given as Minor) was born in Canada about 1820. In 1848 John moved to Plattsburgh, Clinton County, New York where he found work as a blacksmith. With John was his 22-year-old wife Millie, and their two children, 10-year-old Joseph, and Clarissa, age 9. 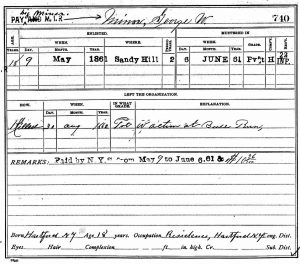 Two years later, in 1850, John is recorded in the West Haven, Vermont census married to Almina age 32, with four children, 7-year-old George W., Mary E. age 5, Martha A. 3, and John Henry, 6 months. Millie Miner and their children have disappeared from John’s life and public record after 1850, his life with Almina continuing for another 20 years.

John & Almina had relocated to Hartford, Washington County by 1855, where they would bring another six children into the world. During their time in Hartford John worked as a carpenter, though family members also told of his work as an itinerant clock repairer who would be gone from home for months at a time.

At the start of the Civil War, John & Almina’s oldest son, George W. enlisted as a private in Company H of the 22nd New York Infantry at Sandy Hill, Washington County, New York. He died during the 2nd Battle of Bull Run, also known as the Battle of Second Manassas, on August 30, 1862. Just one week before George was killed, John enlisted, joining New York’s 123rd Infantry Regiment.

During the Fall of 1862, this regiment was assigned duty in the defense of Washington, D. C., and Frederick, Maryland. That next spring, while preparing to engage Lee’s army, John Minor was injured, and after time in a hospital was discharged at Baltimore, Maryland in July of 1863.

Returning home, John at first resumed his place with Almina and their children, though he was often gone for long periods. He finally abandoned the family completely by the early 1870s. Proof of this is evident in the 1875 Census for Saratoga Springs where Almina is reported as a widow, and with her children, Almon B, 27 a carpenter, Frederick H. age 19, and Rowland age 17 still with her at home.

In the Queensbury, Warren County Census of 1875, John Miner is listed as the head of a family with Canadian born Saloma, his wife, age 45, and children Philip 20, and Agnes 15, who were born in Canada, and Emery 10, Simeon 7, Joe 4, and Lena 5 months, born in Warren Co. It is here that we pick up where we left off at the beginning of this story, with John attaching himself by marriage to his fourth wife, Mary Jane Campbell.

The man bringing all of this to light was John and his 2nd wife Almina’s 32-year-old son, Almon Miner. Based on the testimony of his bigamy by his son, a warrant was issued for John Miner on June 22, 1885. Thought it would take Deputy Sheriff Andrus nearly five months to finally locate him and make the arrest, John Miner was finally taken into custody and escorted to Fort Edward. Here he engaged the services of R. O. Bascom as his counsel. Though an attempt was made to have the charges dropped, Miner was charged and held when he was unable to produce the five hundred dollars bail.

On November 3, 1885, the Albany Argus, reporting on these events, at the same time revealed to all that the accused was “of misery habit and lives a roving lifestyle to “avoid all responsibilities of citizenship.” 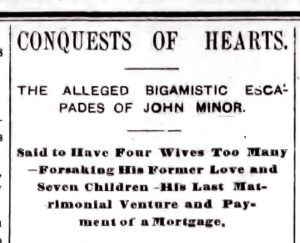 Though John Miner was without the funds to cover his bail, he was not without other schemes to obtain his freedom. The first attempt was offering a bribe to Deputy Sheriff Andrus soon after he left the courthouse. Having no success with money, he slipped away from the constable guarding him during his trip from Fort Edward to the village jail in Salem. In a story published in the Salem Review-Press of November 18, 1885, about his escape, the paper offered this admonishment reminding Miner and anyone else of the consequences of such wrongdoing:

Even if the old peddler and clock repairer succeeds in avoiding a re-arrest, he has by the exposure of his amorous traits made, Saratoga, Clinton, and Washington counties uncomfortable abiding places in his old age.

It was not until late September of 1887, nearly two years after his escape, that John Miner was finally recaptured. He had been hiding in Swanton, Vermont, the same town that he and Almina had lived some thirty-five years before. On October 27, 1887, Miner was brought before the court in Washington County and pleaded guilty to one count of bigamy. He was immediately sentenced to two years in Dannemora Prison in Clinton County, New York.

He was released in June of 1889 after serving 20 months of his two-year sentence. After leaving prison John lived with his son Edward in Queensbury, passing away on May 15, 1907, at the age of 87, and was laid to rest in Glens Falls St. Alphonsus’ Cemetery.

After the untold pain and difficulties to wives and children that accompanied John Miner’s life, this story will end with news from the Albany Argus of February 2, 1888, that is truly unfathomable: 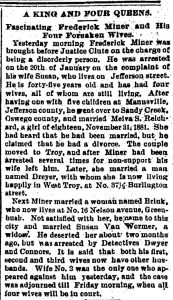 This column was prepared by David Waite for the Warren County Historical Society.