The Hermit of Dogtown

Hermits are tough to come by in Warren County.

According to “A Who’s Who of Adirondack Hermits,” in the Fiftieth Anniversary edition of Adirondack Life magazine there were only two:  artist John Henry Hill at Phantom Island on Lake George and Archie “Bobcat” Ranney of Baker’s Mills. Hill only lasted six years, from 1870 until 1876: the year he was picked up and sent to an asylum, never to return to the county. Archie, on the other hand, made his mark in Adirondack history and lore by “hermiting” for twenty years in Baker’s Mills, a hamlet in the town of Johnsburg.

Bobcat started life as Archibald Claude Ranney, born December 29, 1871, in Wheelock, Vermont, the son of Canadian Robert Ranney and his Irish wife, Jessy. Two weeks after his birth the family moved to nearby St. Johnsbury, in what Archie later learned was a trip in an open sleigh, “with the temperature standing at 26 below zero.” The family continued this pattern of moving, first to Kennebec, Maine, and finally to a log cabin built by his grandfather, John Ranney, not far from where they had started in Vermont.

By 1880 his parents had separated, with his father heading east to seek work as a tool dresser in Maine, and Jessy & Archie going west to live with her brother in Pennsylvania. Before they left the Ranney family homestead in Vermont, his father bought him a cheap suit of clothes, a felt hat, and a pair of boots. He also added the admonition to never look for further support.

In Pennsylvania, Archie helped the family by collecting driftwood along the Susquehanna River and picking coal dropped along the nearby railroad tracks. To pay for his schoolbooks he found work between sessions carrying water for brick masons working in the area.

Unfortunately, by 1886 his uncle had died and Archie, with his mother unable to support him, was forced to move in with a nearby family. Archie recalled later that the farmer, “worked him like a horse,” as he had been taken in solely to replace their hired help. When he was finally able to free himself from the farm, he took a job as a cabinet maker’s apprentice in Athens, Pennsylvania. Worn down by hard labor, Archie fell ill, and at the age of seventeen, he was diagnosed with Bright’s disease. Caused by the exposure to toxins or brought about by infection, Bright’s disease was an inflammation of the kidneys that caused swelling of the legs and fatigue. His physician’s treatment was daily walks, fresh air, and sunshine, “over hills and rough ground,” advice that fifty years later Archie continued to follow.

Looking to leave the manual labor involved in cabinet making, Archie secured an apprenticeship at a local printing office, a career he would follow for the next thirty-three years. Life continued to move forward for Archie when in 1900, at the age of twenty-seven he married nineteen-year-old Eleanor Taylor who he brought home to live in his mother’s house in Athens.

His work at the printing shop required long workdays, at times exceeding seventeen hours, but efforts learning the trade paid off as in 1901 he was promoted to shop foreman and joined the International Typographical Union. By 1904, Archie, Eleanor, their four-year-old son Robert, and Archie’s sixty-three-year-old mother Jessy, moved to Milo, New York, outside of Penn Yan in western New York. Here Archie worked as a printer for the Yates County Chronicle. 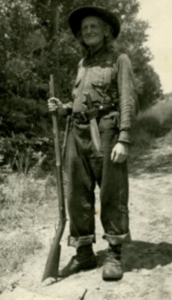 Soon the family moved again when Archie started working for the Sayre Pennsylvania Daily Times. He continued working in the printing business, and by 1922 they had moved again, this time for work in a Binghamton, New York print shop. The loss of a linotype operator at that business provided an opportunity for Archie to advance his career.

With the offer of future employment, a letter of introduction, and fifty dollars borrowed from friends, in 1923 Archie boarded a train for New York City. When he was interviewed by the instructors at the Linotype school, they rejected his application stating that at fifty-two he was too old to learn the trade. After being given the opportunity to address their concerns, he prevailed and was given a place in the class. Six weeks later he returned home with a certificate and expectations of a full-time job. In describing his life after returning to Binghamton, Archie gave this account that was published in the April 21, 1938, Granville Sentinel:

The dream proved a delusion, however. I received only two days’ work the first month, whereupon I packed my suitcase, told my wife and mother I was going to travel as far as San Francisco, be gone a year, but what I secured a steady job, and bidding my family adieu I left my adopted town, little thinking I should not return until eleven years later.

While Archie leaving his family to seek work is possible, the Binghamton City directories for 1924 through 1928 list him as living with his wife Eleanor and working as a linotype operator. By 1929, the family is no longer found in the Binghamton directory, and in the census of 1930, Archie and Eleanor are listed on Tracy Street in Endicott, Broome County, New York.

In the summer of 1930, the couple split up, with Archie Ranney heading to Granville, Washington County, New York where he found linotype work at the Granville Sentinel.

In Granville, Archie quickly became a part of the local community, donating to a fund drive for Granville’s Emma Lang Stevens Hospital and becoming the publicity officer for the Granville Rifle and Pistol Club.

Despite having an indoor job that consumed many hours in the day, Archie was always one who loved the outdoors and sought to enjoy nature as often as he could. In the Local section of the Granville Sentinel, he was occasionally noted as heading off on camping trips and hiking with the local boy scout troop.

Archie Ranney retired from his job as a linotype operator in 1933, and for a time he returned to his family home in Endicott. His stay was not long as the next summer he started back north alone, heading by bicycle to Baker’s Mills, a location he had visited earlier on one of his many trips exploring the Adirondacks. When Archie arrived in Baker’s Mills, he rented a cabin at the end of Edward’s Hill Road, a dead-end road heading northwest out of the hamlet.

A year after Archie Ranney had moved to Baker’s Mills, he wrote the first of many letters to the editor of the North Creek Enterprise. His purpose for writing was to set the record straight about an article the newspaper had earlier published concerning a visit he had made to a local school. This letter also introduced Ranney to the readers of the paper, with the editor noting his age, 63, and that he had come into the area on a bicycle. It is in this letter that Archie calls himself “the Old Wildcat,” for the first time, one of several unique names that would reflect his persona in the coming years.

Before Archie Ranney could settle down into the life of a hermit, he had one more adventure away from the Adirondacks:  California. In late 1936 Ranney left upstate New York to visit relatives on the west coast. While in California, Archie climbed the 6,600 foot, Mt. Wilson, completing the twenty-mile hike alone with only a blanket and a gallon of water.

Though only two years had passed since he had moved to Baker’s Mills, he was already identifying himself as a hermit. In a letter to the North Creek newspaper, Archie told the story of a marauding bear that had been seen in the area. At the end, Archie signed his name as “The Hermit of Dogtown or Wildcat of the Neversink.” Dogtown was a local name for Baker’s Mills, the hamlet where he lived, and Neversink, the title given to a swampy area near his cabin. It was also during this time that he began identifying himself as “Bobcat” in correspondence with the local newspapers.

As a hermit, Archie was far more neighborly than a recluse. His closest neighbors, the Dalaba family, recalled his stopping by every evening to buy milk, with visits that would often last well past the family bedtime. Despite his tendency to talk well into the night, he also gave back, teaching the children to play musical instruments and helping with their schoolwork.

In 1938 the Granville Sentinel published a series of letters from Bobcat that started on March 24th with the headline, “Archie Ranney Writes J. Kelley: Life in Vermont, Being a Short History of the Man as a Lad—First of Series.” This series continued for several weeks, offering a detailed account of his life as well as his thoughts on business, government, and society in general.

Over time,- the title of Hermit came to rest firmly on Archie Ranney, with Granville’s J. Kelly, mentioned earlier, taking time to give him praise in a letter published in the North Creek News Enterprise, January 14, 1948:

Our hermit of Dogtown, somewhere in the Adirondacks, could be better known as the Sage of Baker’s Mills rather than the hermit of Dogtown. Mr. Ranney’s letters reveal that he is a gentleman of keen intellect, wellread, educated and that the better and greater part of his 76 years were spent at the crossroads of normal American social ways of life.

Bobcat Ranney’s opportunity for fame as a hermit came to him in 1948 when he was a featured speaker at that year’s Schenectady Sportsman Show. The Lake Placid News on March 12, 1948, said of his appearance, “he was a long-haired fellow, seventy-six years old. A former linotype operator, a poet, and talented musician.” The newspaper went on to say that he could play the guitar and mouth organ at the same time and was gifted with a beautiful voice. Even with his being the center of attention at the show, he gave back to the community by visiting Sunnyview Hospital and the local tuberculosis sanitorium where he told stories and visited the patients.

Even with neighbors and friends nearby, the challenge of living alone began to take its toll as he headed into his eighties. In the winter of 1952, he ran out of wood late one night. Not having the energy to carry himself to his neighbor’s house only a few hundred feet away, he wrapped up in a blanket and resigned himself to his own death. After hours more in the cold, he rallied and pushed his way through the drifting snow to his neighbor’s door. A doctor was quickly called, and after treating him for exposure sent Bobcat to a hospital in Endicott so he could be close to his remaining family.

Archie “Bobcat” Ranney never returned to his cabin and life as a hermit. His last days were spent with family, first in Endicott and later in Pennsylvania, where he passed away on September 1, 1955.