Podnorszki’s Nursery and Landscaping was a well-known business located at 15 Luzerne Road in Queensbury from 1970 to 2010. For forty years, owners Joe and Fran Podnorszki operated
their full-service landscaping service, nursery, and garden center with the help of their four children, Teri, Joe, Stephen, and Tracy, along with a multitude of  employees through the decades.

Joe began his business in 1970. He had purchased the old Didio’s Flower Shop and greenhouses
for his venture, rebuilding and expanding to create what would become one of the area’s most
highly-respected enterprises. With his wife and family, he offered a full array of landscaping and design services, greenhouses with a wide selection of annuals, perennials, and vegetable plants, a garden shop with everything for the home gardener, and a nursery with evergreens, shrubs, and trees – along with a seasonal snowplowing service. 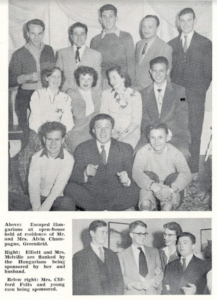 Joe Podnorszki has an amazing story. He was born into a poor family of ten children in
Szekesfervar, Hungary in 1937. In 1956, at the age of 19, he escaped from behind the Iron Curtain in an unbelievable and brave journey. He left his hometown on November 23, 1956 (just weeks after the Russians had invaded Hungary), driving a truck filled with steel for a
company that he worked for, and he headed for a delivery in Kapuvar, in the northwestern part
of the country. Driving past miles and miles of his fellow Hungarians, on foot, all fleeing Communism, he developed his plan to, sadly, leave his homeland and make his way to America – and freedom. At great risk to himself, he stopped to give a ride to several of the refugees. At
one checkpoint, a Russian guard stopped him and asked what load he was transporting. He showed his papers as an employee of the steel company; the machine-gun-carrying soldier walked around the truck to inspect, taking my father at his word. The guard, fortunately, did not look inside to find the human cargo, whom my father had instructed to stay quiet. My father, luckily, made it to his destination and dropped off those he was transporting, left his truck, and set off on foot to walk the rest of the distance to cross the border into Austria. In so doing, he had to travel at night, in cold and snowy terrain, even swimming across a canal to avoid being seen by a Russian border patrol. He made his way into Austria, where an
International Red Cross team was aiding the Hungarian refugees. They helped him find passage
on a ship to America, and he arrived In New York Harbor on New Year’s Eve 1956.
The Red Cross set Joe up with a host family in Corinth, who helped him get a job at Binley Florist in Glens Falls, owned by Al Hirsch, who himself had emigrated from Hungary in the 1920’s. Speaking no English, Joe enrolled in “night school” at Glens Falls High School to learn the new language. It was there that he met Frances Tracey, a senior, who was assisting with
registration, and they married in 1959. At Binley’s, Joe discovered his talent for flowers and
landscaping. He became well-known for the beautiful wreaths and garlands with which he
decorated the Glens Falls Insurance Company and downtown banks during the Christmas
season. 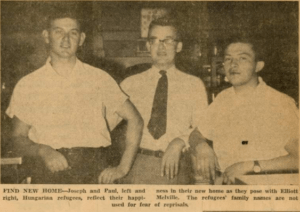 By 1970, Joe decided to take the giant step of realizing his long-held dream of owning his own business. With one truck, three acres on Luzerne Road, and a lot of ambition, he and his family built Podnorszki’s Nursery and Landscaping. For forty years, it was a popular garden center for the entire North County. Joe, and his son Joe, were known far and wide for their beautiful and impeccable landscaping — designing and maintaining homes and businesses from Saratoga Springs to the upper reaches of Warren County.

Joe, now in his mid-80’s, still has enormous pride in the family-owned business that he created.
His inspiring story shows the contribution of one remarkable immigrant and his American
dream — and that hard work and remembering your roots still count for a lot in this world.

One thought on “Rewind: November 15, 2022 – “Podnorszki Nursery and Landscaping: A Hungarian Immigrant’s Story””