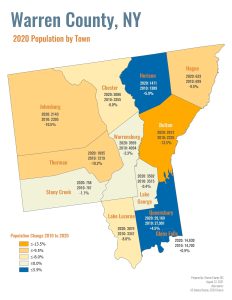 Figures that were gathered during the 2020 census have started to be released.  This map, created by our friends at Warren County GIS, presents population changes in each of the towns and the City of Glens Falls from the 2010 census figures.

A quick look at the figures tells us this:

In spite of the fact that only 3 of the municipalities gained in population and each of the others lost population, the 2020 census  reported that the county increased its total population by 30 individuals.