“As early as the 1850s the little spar booms envisioned by Abraham Wing III were quite inadequate to hold the floating logs until needed by the mills.  Every time there was a freshet, the high water carried the logs into the main channel, and distributed them along the river banks from here to Albany.  To put a stop to this type of disaster, the mill owners and lumbermen between Fort Edward and Feeder Dam united to build at Big Bend the Big Boom, which was composed of large logs and timbers bolted and chained together and supported by numerous piers placed diagonally and at frequent intervals across the stream.  Close tab was kept on every log let out of the big boom, so that an equitable assessment could be made on the owner.  At the junction, farther downstream, the logs were assembled in different small booms according to the owner’s marks stamped on the ends of the logs. …” (from History of Warren County New York by William H. Brown, ed. (1963). 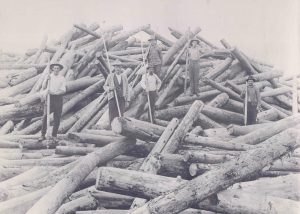 Logs at Big Boom waiting to be sorted

News Story – from the Friday, March 25, 1859 issue of the Glens Falls Messenger:

“The drenching rain of last week, caused a sudden rise of the water in the Hudson, and the thousands of logs afloat, which filled the river for 50 miles above here, last Saturday, came sweeping down together with immense bodies of solid ice, clearing everything in their way.

The Big Boom three miles above here, had by its own weight, and the weight of ponderous chains attached, sunk so low as to permit the logs to pass over without hinderance, and some 250,000 logs that should have been stopped above, to have been sawed at our mills, went sweeping with a fearful rush down over the Falls.  Some 75,000, it is estimated, found a lodgement behind the island at Sandy Hill, and others were stopped in side booms.  The boom at Fort Edward was also broken, and several thousand logs passed on down the river.  Many of them were stopped at Fort Miller and but a few went below Stillwater.

The loss of booms, piers and logs, falls heavily upon our lumbermen, though the logs are not a total loss, as they can be saved by the mills below with a little additional expense.  It was at first supposed that our mills would have to remain idle during the summer for want of stock, but we are told that there are abundance of logs up the river still, enough to supply the mills the whole season, and the Big Boom is now in a condition to hold them when they come down.”

And some additional history of Big Boom:

“…It was this junction boom that broke in the flood of 1913.  The logs, riding the furious high water, pushed the iron bridge at Glens Falls off its piers.”  (Brown, 1963)

Stan Cianfarano, Warren County Historical Society Co-President and Warren County Historian found a series of newspaper clippings in the Historian’s office compiled by Mrs. A.H. (Nellie) Rapp in which she reported on items found in 1859 issue of The Glens Falls Messenger.  With some editing, one story is repeated here.