We welcome a new member to our Rewind writing staff with this article on Michael Donovan, local champion from Warren County.  David Waite, a history buff from Amsterdam, New York has expressed an interest in sharing some of is historical research.  Check out David’s bio at the end of the article.  Welcome to the writing team, David.

We will never know if the spectators at the New Jersey Athletic Club’s games held in Bergen Point, New Jersey responded with stunned silence or exuberant support as twenty-one year old Michael Henry Donovan pulled away from the reigning world Heel and Toe racing champion Samuel Leibgold  that day in the summer of 1896.  By the end of the one-mile walking race, Donovan had outdistanced not only the reigning champion but also 18 other elite athletes to win the contest by 18 feet. [1] [2]

The story of the life and racing career of Glens Falls area native M. H. “Mike” Donovan is one of humble beginnings and stubborn perseverance. His is a story that has sadly slipped into obscurity, along with history of heel and toe or race walking, a sport that a century ago would pack arenas and be the talk of any town that hosted an event. 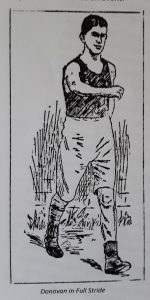 It was in May of 1875 that Dennis and Mary Donovan welcomed their fourth child, Michael Henry into the world. Named after his grandfather, who sometime around 1825 had emigrated with his parents from County Cork, Ireland, first to Canada and then into eastern New York State. By 1850 the Donovan’s had settled in Glens Falls, though as the family moved to South Glens Falls in Saratoga County by 1870. There can be confusion about where Michael Henry Donovan called his home, though as he gained fame, Glens Falls clearly embraced him as one of their own.

By the time of Michael’s birth, Dennis and his family were living in Saratoga County and his father was earning a living as a boatman on the Hudson River for the Finch Pruyn paper company. Over the next 15 years his sons, including the youngest Michael, would follow their father’s lead and would also work on the river.

Coming from sturdy, hard working Irish stock, as a youth Michael worked as a boatman, day laborer and even at times as a stagehand at the Pruyn Opera House on Warren Street in Glens Falls. While it has not yet come to light when Donovan first showed an interest in race walking, the story goes that he honed his skills on the indoor track in the basement of the theatre. Possibly due to his humble beginnings or his Irish background, Michael was sometimes ridiculed and mocked by those who heard of his interest and growing talent in speed racing. In the few newspaper reports of his early career as an amateur racer we learn that by the age of 18 he was both competing and often winning the local contests he entered. [3]

Donovan picked up his first major regional award, the Championship Medal of Northern New York when he defeated H. W. Stoughton in the one-mile contest at Sandy Hill (now Hudson Falls) in Washington County on July 4th, 1894. After the contest mentioned at the beginning of this article, his next medal was

when Donovan again competed at the distance of one mile in the New York Athletic Club’s meet at Travers Island on the Long Island Sound in September of 1897. In this contest he went up against ten competitors, coming in first by ten yards and willing the gold. This not to say that Mike always won, one example being another race in 1897 when he raced against the world champion Samuel Leibgold and lost by eight inches at Madison Square Garden, the other competitors finishing over 100 yards behind. 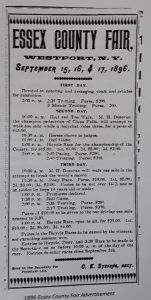 In 1902, Mike looked past the competition here in the Northeast and toured the West to compete against their best walkers. One of the highlights of this trip was his defeat of the Western and Canadian champion H. O. Messier in a ten-mile race. The race went to Donovan who walked the distance in 1 hour, 17 1/2 minutes  [4] [5]

Throughout his career as a speed walker, Donovan was willing to race against most any opponent, including horses, bicycles and relays of runners often with enormous handicaps. Here are some examples:

At the National Circuit bicycle races held in Glens Falls during the summer of 1898, Donovan walked a mile against a bicycle ridden by R. C. Menzies of Glens Falls, who was to go 2 ¾ miles. The winner was Mike by a quarter mile, covering his distance in six minutes and thirty-seven seconds. It was in this same year that Donovan turned professional after racing and defeating Nathan Powell, the champion of England for a $250 purse and the world’s championship. Even with fighting a strong wind, Michael won the one-mile event by 35 yards in 6 minutes and fifty-seven seconds.

When Ticonderoga celebrated the Fourth of July in 1899, Mike was invited to compete against both runners and bicycles. In the race against the bicycle, the rider circled the village square five times, Donovan twice, with Michael finishing first. Next, he competed against a runner in a race of 100 yards. Even with his competitor given a 40-yard lead, Donovan still prevailed. Along with the races, Mike even had time that day to break the record for the 320-yard walk by 9 seconds, finishing the distance in 59 ½ seconds. Even horses could not keep up with Donovan’s speed walking, and in July of 1899 he defeated the famous “Long Street” in a race held in Troy, New York.

In 1903, Michael Henry Donovan married Katherine Denio in Glens Falls. In July of that same year Katherine gave birth to Kenneth Francis Donovan. The very next year Katherine was granted a divorce and awarded custody of their son. The divorce decree allowed Katherine to immediately remarry, though Michael was not allowed to wed until whenever in the future she passed away. Not seeming to be deterred, 0n December 22, 1904 he married Cornelia Dempsey Ober, a 43-year-old widow from Beverly, Massachusetts and together they took up residence in that town. [6]

Towards the end of Michael Donovan’s professional career as a speed walker it became increasingly difficult to get a race against those who were considered to be the best in the game, at least a contest where there was not a sizeable handicap placed upon him. In August of 1908 Donovan was invited to Boston to compete, the distance three miles against three other experienced walkers, each doing only a one-mile relay. At the end of the first mile Donovan was so far ahead that he asked for the next runner to start even with him. As the end of the second mile approached, he again asked to have the runner start beside him. Michael finished the final mile leg of the race eighth of a mile ahead and with a record-breaking final time of twenty minutes fifty-one seconds. This was Donovan’s final professional race. [7]

In his 497 races over the 15 years of amateur and professional speed walking, Michael Henry Donovan beat over 800 of the fastest racers in the world, including the champions of England. Ireland, Scotland, Germany, France, Australia and America. [8] Standing less than 5 foot 9 inches in height, with a medium build, brown hair and weighing in at around 160 lbs., Michael’s physical appearance masked his prowess on the track. Donovan’s stride was 45 inches, and at full speed he took 4 strides that covered 20 feet per second. During his career he broke every world speed walking record from 50 yards to ten miles. [9]

After his athletic career, Michael was hired by the Forestry Department of the Massachusetts Department of Conservation. By 1930 he had advanced to the position of division superintendent of forestry, a job he held until he retired in 1949. Michael Henry Donovan passed away in Beverly. Massachusetts in 1960, and after funeral services in Beverly, his remains were brought back to South Glens Falls and was interred in the Donovan plot in St. Mary’s Cemetery. [10]

I am an amateur researcher interested in the history of the Mohawk Valley and Adirondacks. I am a direct descendent of early settlers in Warren County, hardscrabble farmers from Stony Creek. My start in researching was as a volunteer with the Association for the Protection of the Adirondacks in Niskayuna, New York. Since that time I have had articles published by historical organizations in St. Lawrence, Franklin, Herkimer and Montgomery Counties. During my research into Adirondack history I have encountered a number of interesting subjects centered in Warren County and am pleased to have an opportunity to share them with the members of the Warren County Historical Society.