When a young Leander “Lee” Harris was carried in his mother’s arms onto the Lake George steamboat Mountaineer who could have predicted that 90 years later he would be looking over that same body of water reminiscing about his lifetime of work on the lake and service to the community that he called home.

The Harris family had gained a foothold in the region when in 1786, Leander’s Great-Great-Grandfather Sergeant Moses Harris purchased two-thousand acres of land along the edge of Lake George in Queensbury. The settlement that grew from this purchase became Harrisena, a community of productive farms and summer resorts.

Born in 1832, Leander Harris was the son of Henry and Harriet Harris, a farming family from Queensbury, Warren County. From the very first Leander loved the lake and spent much of his boyhood on or near its waters. At the age of seventeen began working at the Lake House in Lake George, one of only four hotels on the lake at that time. Opened in 1832, this 300-room hotel had piazzas on both the front and back and a steamboat dock only a short walk from the main entrance.

By the age of twenty, Leander was a deckhand on the steamboat John Jay. Built by another Harris, John J. in 1850, this steamer was purchased by the Lake George Steamboat Company in 1854. Leander served on the boat for two years, and so, fortunately, was not on board when it was destroyed and sunk in a deadly fire in 1856. Deciding to become his own boss, in 1854 Leander Harris began working as a guide on the lake and soon assembled a fleet of small boats of his own, making his headquarters at the newly opened Fort William Henry Hotel.

In 1870 Leander married Helen Minerva Irish, the twenty-six-year-old daughter of Amos Irish and his wife Sophronia of Caldwell. That next year Minerva gave birth to their first child Lenela Lucetta, who went by name of “Nela.” In 1873 Helen she added to the family with a son whom they named Walter. Their third and last child was Leander, Jr. born in 1875.

It was around the time of his marriage that Leander nearly lost his life in a hunting accident. While hunting for English Snipe near Lake George with another man, Harris was shot in the face. The birdshot damaged his right eye so severely that it could not be saved, with other pieces left embedded that he carried for the rest of his life. 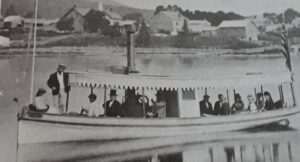 This injury did not slow Capt. Harris, as in 1871 he had the Owl, a 25-passenger screw propeller steamboat brought up the Hudson and onto Lake George. It had a length of thirty feet, was seven feet wide, and sat three and a half feet in the water. It is said that photographer and guidebook author Seneca Ray Stoddard used the Owl as his platform to make triangulations for his map of Lake George. During Leander’s piloting career he also served as the captain of several private yachts, including the 60-foot steam yacht Cricket, put on the water in 1892 by General Robert Lenox Banks of Albany. This craft has been built the year before by Captain O. M. Smith, of Caldwell who had originally named it “Hiawatha.” From 1894 to 1900 Leander Harris was employed to captain the hotel yacht Oneita by Silas Paine at his newly built Silver Bay Inn. Over his many years on the lake Captain Harris held forty licenses as both master and pilot of boats on Lake George. During these years he piloted hundreds of excursions on the lake.

Captain Lee Harris was equally at home under sail as piloting a steam yacht. In 1887 the newly formed Lake George Yacht Club held the first in a series of races on a course laid out adjacent to Diamond Island. That day Harris was sailing the Lively Hannah, a single-masted yacht owned by Judge Longworth against four other sailing craft. The contestants were tightly together until a tack opposite Diamond Island, where he blocked the wind from his opponents and took the lead. It was a tight contest, but Harris held off his closest opponent, the yacht G.B.H., owned and piloted by George B. Holt, to take the victory.

Around 1885 Lee Harris added horse racing to his business interests purchasing the chestnut filly foal Daisy Kenmore as a foal. By the time the horse was ten months old, he led great hopes that she would develop “wonderful speed” when she reached maturity. As a three-year-old in 1888, Daisy Kenmore was put to the test when the Glens Falls Trotting Horse Breeders’ Association held their second annual meeting at the Glens Falls Driving Park. Though disqualified in her first race, four years later Daisy Kenmore, was still racing, picking up two firsts and three seconds in five races at the 1892 Clinton County Fair.

In May of 1887 Helen Minerva Harris, Leander’s wife passed away at the age of forty-two after a long illness. She was eulogized as a woman respected and loved by all who knew her. She was laid to rest in the Harris family plot overlooking Lake George in Caldwell Cemetery.

For twenty years Captain Harris was a resident of Caldwell and served the community as town supervisor and a tax collector. When he passed away in 1930, he was the oldest living member of the Warrensburg Masonic Lodge. As a member of the Lake George Fish and Game Association, he supported the development and protection of the lake. As part of this work, in April of 1896 Capt. Harris assisted in putting 500,000 trout fry into Lake George. He was also an officer in the organization, holding the office of Vice President in 1897.

Capt. Lee Harris was known as a “voracious” teller of his fishing stories. Though so far none of these stores have surfaced, he certainly had a sense of humor. In an interview by a Glens Falls reporter in 1887, the fifty-four-year-old Lee told of his being “the oldest relic of Fort William Henry, save some arrow-heads, and Queen Anne muskets.”

Leander Harris was a man who loved the wilderness as much as the traveling on Lake George. Even in his later years, he continued to be vigorous, even climbing Black Mountain on Lake George at the age of eighty-four, and at 90 he was hunting at Long Lake. The Glens Falls Times often reported on his hunting adventures, telling of trips to the Lewey lake, the Boreas River region, and Tongue Mountain as well as to Canada in 1907 & 1911.

On the day of his death, October 25, 1930, the Glens Falls Times announced the death of Captain Leander Harris with the headline “CAPTAIN HARRIS SUCCUMBS AT ASSEMBLY PT.” The paper eulogized him as someone who had a keen interest in both his local community as well as the country. Recalling his over sixty years of piloting Lake George excursion and pleasure boats, the paper noted that he was a familiar figure to summer visitors. Captain Harris was laid to rest in Caldwell Cemetery next to his beloved wife Helen and overlooking the other love in his life, Lake George.