ONCE UPON A TIME, QUEENSBURY HAD A KING

California’s artichoke history began in 1922 in Castroville. Nearly 100% of America’s fresh artichoke supply comes from California and as a way to celebrate this vegetable, the region has been dubbed as the Artichoke Center of the World.  Norma Jean Mortenson, better known as Marilyn Monroe, was named the first honorary Artichoke Queen in 1948.

Gilroy, California, 35 miles south of San Jose, is known as the Garlic Capital of the World. It, too, is celebrated with a three day festival where one can experience garlic ice cream, garlic drinks and all sorts of garlic goodies.

In Queensbury, New York, CELERY was once, “KING.”

Celery is a vegetable with a long stalk topped with leaves.  It can be chopped up and added to stews, salads, soups or eaten on its own. Celery is of minimal calories and a great food if you are dieting.  It is a great addition to a Bloody Mary! 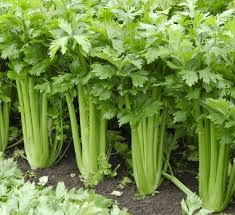 Early in the 20th century a Dutch immigrant, Harm Oudekerk, was a thriving celery farmer on land in the area of Dix Avenue and East Sanford Street.  This was long before Quaker Road was built.

Harm brought his family to America from Holland in 1897.  He worked on several farming operations, in the Midwest, and learned the celery business. In 1910, upon answering an ad in a farm paper, he moved to Glens Falls, to lease the Tuttle farm, where he raised celery, cabbage and onions.  Following the death of Mr. Tuttle, Harm made arrangements to take over the entire farm.

Abundant water and rich, black, muckland soil made a deep peat of decomposed vegetation, which was ideal to grow celery.  Harm’s son, Ben, joined his father to cultivate 10 acres of celery and another four acres of onions.

In 1918, Harm retired and Ben acquired 13 acres next to the Tuttle farmland. Albert, another son, joined the team in 1921 and the farm became H. Oudekerk & Sons.

By this time, the celery farm occupied some 29 acres along the present Quaker Road south to Dix Avenue. 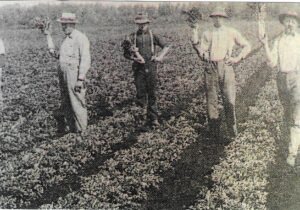 Cultivating this crop was labor intensive.  To be ready by the 4th of July, the tiny seeds were planted by hand in February and raised in greenhouses, then transplanted to fields in warmer weather.  One worker would lay out the plants in rows in the fields while two other people, on their hands and knees, would follow down the rows planting them.  Weeding was accomplished with human powered “wheel hoes” and by hand. The weeders would tie burlap bags around their knees as padding. Drainage ditches were dug in precise patterns to drain the soil and were served as a source for water when needed.

White, crisp celery was preferred, rather than the green celery that we eat today.  The stalks would be covered with 12 inch boards so as to block the sunlight.  Then the boards would be uncovered, from row to row, as the celery was harvested.

Throughout the ‘20’s the farm provided local stores with the produce and extended the market to include Saratoga and Lake George summer tourists’ hotels and restaurants.

They built a large storehouse on the corner of Malcolm Avenue (Leland Avenue) and Dix Avenue.  All sorts of vegetables were stored, washed and trimmed, before being shipped by truck or train to the Menands (Albany) wholesale farm market and down to New York City. Onions, beets, cabbage, carrots and celery were thus available from Thanksgiving through Christmas.

The barn or storehouse, had a large, open space on the upper level and it was used for dances and local bands during the 1920’s and early ‘30’s. This large room was heated at both ends with wood stoves, and it was accessible from a ramp on the side.

In the 1930’s the farm continued to grow, as Albert bought land on Meadowbrook Road and cultivated his own truck gardening business with tomatoes, celery, and onions.

At the end of World War II, larger Pascal celery shipped year-round from California and Florida. Supermarkets shifted to warehouse suppliers, rather than buying directly from local producers. Not only had the economy changed, so had people’s taste for celery.  New and larger varieties, with crisp green stalks, were available year-round.

By 1950 both Ben and Albert gave up their celery business.  Albert converted his greenhouse and went into raising chickens, until the large poultry factories took over the markets.  Ben utilized his greenhouses as a plant business, until he sold it to the Garden Times founder, Harry Troelstra, in 1967. Troelstra and his sons expanded their business from the greenhouses, to one of the largest garden centers in the area.

Today, the farm soil remains a muckland and is now occupied by several commercial buildings.  The Tuttle farm on East Sanford is overgrown with brush and trees, and the ditches have been filled in.

In our local supermarkets, our celery produce, may have traveled from California, Michigan or Florida, but homegrown can be found at local farmer’s markets.

In the Victorian era people used to keep celery in special glass vases and display it at visible places. Celery dishes were considered a delicacy and they were the main thing at every dinner party.

Whenever you’re not feeling like eating celery, every day on your diet, think about the first -class guests on the Titanic. Celery was an exclusive treat!

This article was produced by Eloise O’Neil for the Warren County Historical Society.