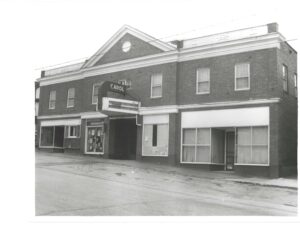 In 1925, Alice Faxon Brown sold land to Walter H. Wertime on which the Bank and Theater building were built.

The October 2, 1930 edition of the Ticonderoga Sentinel, Ticonderoga, NY:

“A new $50,000 building to contain a theatre and stores is to be erected in Chestertown by Walter H. Wertime, Cohoes attorney, according to reports made in Glens Falls Friday. It is said that separate contracts for the construction of the building are to be received up to October 15th, while excavation is now under way.”

In December 1931 the Chester Theatre opened. There was a children’s Christmas party held there on Christmas Eve and a movie feature, “Riders of the Purple Sage,” was shown on New Year’s Eve. There were movies and vaudeville plays and shows in the theatre through the 1930s, 1940s, and movies into the 1950s, and it was called the Chester Theatre.

Walter H. Wertime died in July 1953. In early fall 1953, Julius Perlmutter of Albany was the new proprietor of the theatre. He refurbished the theatre and put new lighting outside. He was head of Car-O-Len Theatre, Inc. He operated other theatres in Lake George, Cobleskill, Watervliet, and Warrensburg. He changed the name of the theatre to Carol Theatre after his daughter, and had a grand opening the end of October 1953.

In Sept. 1955 the estate of Walter H. Wertime sold the theater building to Angelo and Thelma Campanaro. They kept the name Carol Theater and continued operating it.

The theater has closed and opened again several times over the years and is and was used in the 2000s for summer shows sponsored by the Tri-Lakes Business Alliance, (now the Tri-Lake Community Alliance.

In 2019 Ryan and Vanessa Hutton bought the building. They made improvements and renovations and opened in 2021 with shows during the summer. They intend to operate the theater again in 2022. 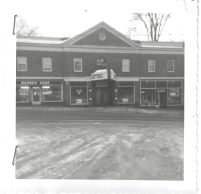