DOCTOR TURNS THUG, KILLS 3, IS SLAIN BY THE POLICE IN CEMETERY

Eugene was nervously adjusting his tie and thinking about any loose ends. He was eyeing the clock.  The bank closed in a matter of an hour and he needed to be there a little before the doors were locked.

The drive from Prattville to Ozark should take him 45 minutes.  He knew this because he had driven the route several times as practice runs.  After he put on his sport coat, he wrote a note which he hung on his chiropractor’s door.  It read

“Emergency.  Called out.  Please call for an appointment on Wednesday after 2:30.”

Again, he reviewed his list…his “to do list” for robbing banks.

The vice president of the Commercial Bank of Ozark, Alabama was Fred Flowers, who was an affable gentleman and father of four teenagers.  On that Tuesday afternoon he was working in the loan department cage.  As he was beginning to check on the day’s business and lock up, he was interrupted by a commotion behind him.   A heavy-set man with a .45 caliber handgun, approached him.  This unmasked, widely aggressive gunman, jumped onto the counter, stared at Fred and shot him in the head, point blank.

Then he jumped off and ran to the far corner of the room where customers and employees were frantically squeezing through the back door, trying to escape.  David Jackson, a 21-year-old teller was last in line to flee.  For no apparent reason, the robber shot David in the back.  The young man dropped headlong to the floor and died instantly.

The gunman fled out another door to the alley where he had left his Sky-blue 1953, four-door Cadillac running.  He bolted without taking any money.

The madman’s killing spree continued into the afternoon.   Word got out that the gunman was heading North toward Troy.  The police chief radioed to Officer Hayden Youngblood that the robber was headed his way.  Youngblood went to a gas station and crouched at the front door.  The killer drove around the front of the building and, with a single shot, killed the young officer.

By that time, people were jumping in cars and trucks to pursue the killer.  He was chased though Troy to the Pleasant Hill Cemetery.  Realizing he could drive no further, the gunman jumped from his car and tried to hide amongst the tombstones, to continue the gun battle.  Two deputies were wounded before Eugene met his fate that sunny spring afternoon in May, with his body draped over a tombstone.

Holy Moses!  The headline from The Post Star was absolutely shocking!

“Killer of 3 Was a LOCAL Chiropractor.”  The story went on to relate that Eugene Gault, a local man, originally from Center Street was a bank robber, murdered three people, in cold blood, and was himself killed in a shoot-out at a cemetery in Troy, Alabama.

Eugene and Phyllis Gault had attended Palmer School of Chiropractor in Davenport, Iowa.  After graduation they moved to Glens Falls in 1947 to set up their practices.  Eugene, by all accounts was quiet and polite and earned a good reputation as a chiropractor.  He became involved in the Toastmasters Club, and the couple were parishioners at the First Baptist Church.   To supplement their income, Phyllis took a job as credit clerk at Montgomery Ward, a position which she held for many years.  Eugene also worked at odd jobs.  By 1960 he decided to move to Alabama, alone, to make a new start with his practice.  The couple did not divorce.

In early 1962 Eugene came back to Glens Falls for a visit and tried to convince Phyllis to move with him, but she was settled in her job and life without Eugene.

Over the course of the next few weeks, the events of the tragedy in Ozark and Troy, Alabama came to light.  It was discovered that Eugene’s first robbery had been in Auburn, Alabama in 1960, where he stole $30,000.  He used some of this money to buy the house and office where he lived in Prattsville, Alabama.  Back In WWII, he had been a belly gunner in the Air Force, and this fact accounts for his excellent marksmanship.

It may also account for why he killed people in cold blood. He had never met Fred Flowers or David Jackson, and yet, he did not hesitate to pull the trigger.  Could it be, in hindsight, he suffered from post-traumatic stress disorder?  How could a kind, gentle doctor commit such murders?

Eugene’s body was sent to Ashland, Ohio, where his father and some family resided.  He was buried in a $25 suit and a cheap wooden box.

Back in Glens Falls, traffic on Center Street crawled and crawled, as people drove by the house of the local man gone “mad.”  Did folks really expect Eugene Gault’s ghost to appear as they gawked?

Phyllis Gault continued to live in her huge house and maintained her lovely gardens.  At some point, she painted the 3100 ft. Victorian house, light purple.  The elaborate Gothic trim, shutters and front door were painted white.  In 1984, the property was named to the National Register of Historic Places, not because of the “murdering bank robber” who had lived there, but to honor the legacy of a man, Russell M. Little, who founded the Glens Falls Insurance Company in the 19th century.

For many years, the “Lavender House” and Mrs. Gault’s gardens were included in historic house tours in Glens Falls.

Phyllis lived well into her 90’s. Her house was no longer beautiful. In 2014, 67 years after she and Eugene moved in, the house was sold for cash, in its deteriorated condition.  The once lovely lavender paint was fading, as were the memories of May 1962.

The following was found in the archives of the Historical Society.  It is an article that appeared in ‘The Chronicle’ in November of 2014.  The focus of the article is on the house and its owner, Russell Little.  It is the house that the Gaults purchased when they moved to Glens Falls. 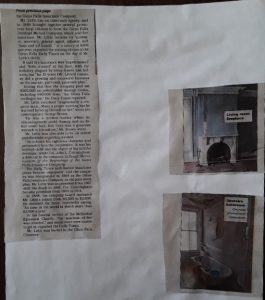