This is the second part of a two-column series to look at the development of Warren County.  The first column looked at the land grants that resulted in this place called Warren County, New York.  This column looks at the formation of the towns that make up the county.

Before maps, Warren County was important to the Native Americans who followed the waterways and abundant forests to fish and hunt here.  The area started out on the earliest maps as part of the ‘British Province of New York,’ and forts were established between the Hudson River and Lake Champlain.  As early as 1759, Jeffrey Cowper (also seen written as Cooper) is given the distinction of the first ‘permanent’ white settler to the area.  Sir Jeffrey Amherst indicated that Cowper was to ‘inhabit the Post at Half-way Brook’ to preserve the buildings erected there by the military.

The first ‘name’ given to the area indicated it was part Albany County, which covered much of eastern New York; and later it was part of the newly formed ‘Charlotte County’ – which included much of northern New York – named after King George III’s consort, Princess Charlotte of Mecklenburgh-Strelitz.  After the Revolutionary War, Charlotte County was renamed Washington County in honor of General George Washington.

On March 12, 1813 the Legislature split off the western part of Washington County and the area became Warren County, named after General Joseph Warren, a colonial leader who was killed in action at the Battle of Bunker Hill.

Thirteen other states have a Warren County, named after Joseph Warren, but New York was the first to honor General Warren in this manner.

Warren County, New York is made up of eleven  towns, two villages, and one city.  Here is how we became unique:

The Evolution of Warren County

Mid-1700s     the British claimed the land and defended it from outsiders (a.k.a. the French in Canada) – the area made part of Albany County

1774     King George III opens the Hyde Township to 39 investors, one of whom was John Thurman

1805     Town of Johnsburg formed, taken from Town of Thurman

1813     Town of Warrensburgh formed, Taken from Town of Thurman

1838     Town of Horicon formed, taken from Towns of Hague and Bolton 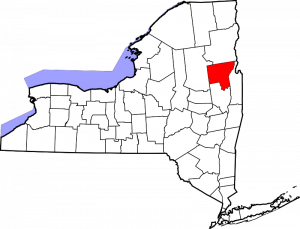 Today Warren County covers approximately 870 square miles and has a population of 65,707 according to Wikipedia.