THE GILMORES OF PINE VIEW

In the sweltering heat of July 1864, James R. Gilmore, a businessman and confidant to Abraham Lincoln, traveled to Richmond, Virginia, to meet with President Jefferson Davis and present a set of accords, by which the North would be willing to have peace.

Although Mr. Gilmore was born in Boston, in 1823, he became very familiar with Southern society.   At the young age of twenty, he joined a shipping business and one of his duties was to take an annual tour of planters engaged in the raising of cotton, grain, and turpentine in North and South Carolina, Georgia and Florida. In the beginning of the Civil war, under the pen name of “Edmund Kirke,” Gilmore published several novels containing realistic portrayals of Southern life.

His writings contained graphic, unexaggerated pictures of slavery and helped to decide Northern sentiment in favor of emancipation and the continuance of the war.  He conferred with Abraham Lincoln several times as they talked about Southern feelings toward war.

In July of 1864, Gilmore went to President Lincoln with his “peace” idea, in which he and the Rev. Dr. Jaquess, Colonel of the 73rd Regiment of Illinois Volunteers, would travel, under the white flag of truce behind Rebel lines, to meet with the President of the Confederacy, Jefferson Davis. President Lincoln made it quite clear to Gilmore that the peace overtures to Davis were not requested by him.  This journey was, in truth, all Gilmore’s idea; he was not being directed nor blessed by the President.  Colonel Jaquess and Gilmore were able to meet with Jefferson Davis for two hours, and suggested ways in which the war could be stopped.  All they could elicit from Jefferson was a declaration that he WOULD NOT consent to peace except on the basis of the independence of the Confederate states.  However, this meeting was not entirely unsuccessful.  After returning to Washington, James Gilmore presented to Lincoln a report of Davis’s defiance.  The President was, surprisingly, not displeased, and saw a political advantage in publicizing the obstinacy of his enemies.  He requested Gilmore to have the report published in The Atlantic Monthly.  The article helped Lincoln win the next election, and the war ended nine months later.

Gilmore lost his fortune during the war as the Confederates seized his ships and business interests, but he continued to write novels, poems and war songs. He edited the Continental Monthly from 1862 to 1865 and collected letters from many literary men of the period.  Among his intimate friends and acquaintances were Lincoln, Holmes, Longfellow, Emerson, and Lowell. He developed a friendship with Judge John W. Edmunds, whose long connection with the New York bar, gave him a close acquaintance with many of the leading statesmen and people in public life.  His connections within his political and literary circles subsequently led to a romantic interest in the judge’s daughter, Laura Edmunds.  Laura and James were married in 1879.

In 1860, Judge John Worth Edmunds built “Cheonderoga,” a beautiful home on Lake George, in the town of Bolton, New York. He and family members spent winters in Knoxville, Tennessee and summers in the hamlet of Diamond Point, on the west shore of the lake.

After his wife passed away, the Judge became seriously interested in spiritual manifestations and held conversations with his departed wife, in the presence of other people.  It had been reported that his interest in psychic phenomena ruined his legal reputation, as he was encouraged to retire from the bench. The Spiritualist Movement was not widely understood nor accepted by society at that time.  Judge Edmunds adjusted to a whole new life, as he became one of the founders of the Spiritualist Society in America.  Sir Arthur Conan Doyle (author of Sherlock Holmes) was one of his loyal supporters.

Laura, from an early age, showed evidence of her power as a medium by being able to see visions and hear voices.  A number of famous, and not so famous people from abroad, came to attend seances at their Bolton home.

Upon her father’s death in 1874, Laura inherited the property and continued to attract clairvoyance clients from around the world. She never referred to her role as a medium, and very few people at the lake realized her interests and talents in this phenomenon.

James Gilmore held his wife in very high esteem.  He transferred all his copyrights to her, because she deserved them.  He told the world that without her, he would not be able to write.  She attended to all his financial and household affairs, managed most of his correspondence, and gave him critical judgement of his work, with remarkable insight. Laura was his muse.

Around 1900, the Gilmores moved to Glens Falls and he passed away in 1903.  Besides Laura, three children from a previous marriage survived him.

On his burial plot in the Pine View Cemetery is a monument to James Gilmore, furnished by funds from the Authors Club of New York.  The inscription reads:

I only want it may be said,

When I am gathered to the dead,

His life should be his monument.”

Laura Edmunds Gilmore, a woman of unusually high education, especially in art and literature, continued to live in Glens Falls, on Pine Street, surrounded by all James’s books and manuscripts.  She also owned one of the rarest and most interesting collections of Native American relics to be found in the state.  Her father, Judge J.W. Edmunds, was an Indian commissioner in 1835.  Upon his visits to villages, he succeeded in gathering one of the finest collections of Native-made articles, which included warfare weaponry as well as domestic items. A large number of these artifacts were hung in Laura’s sitting room for visitors to view.  There were genuine tomahawks besmeared with blood, war clubs carved with ornamental symbols, Indian pipes more than three feet long; and moccasins and leggings, all covered with Indian beadwork and porcupine quills.

She also had an old, extremely comfortable chair.   Many dignitaries used it while writing law, fiction, sermons and poetry, in her home. She was very proud of this chair and said that it seemed to inspire everyone who sat in it.  Her father wrote law in this chair and Edmond Kirke wrote his novels. William Dean Howell, when he visited their home on Lake George, finished one of his books and Father Hector, one of the Paulist fathers, visited Laura many times and wrote sermons while sitting in this chair.

Laura  Gilmore died in 1917 and lies at peace next to James in the Pineview Cemetery.

Here is a partial list of Edmund Kirke books, many of which are still in print:

Personal Recollections of Abraham Lincoln and The Civil War, published in 1898 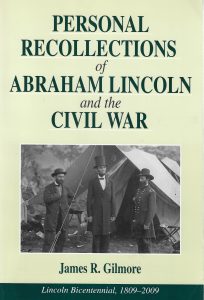 Down In Tennessee and Back By Way of Richmond, 1864

This article was prepared by Eloise O’Neil for the Warren County Historical Society.