The following is the text of a speech that was given on Memorial Day, 2022.  The presenter was Marisa Muratori, Lake George Town Councilwoman.  The speech was delivered it at the ceremony at the Tomb of the Unknowns in Battlefield Park. 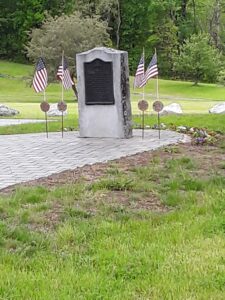 “Memorial Day was first widely observed on May 30, 1868 to commemorate the sacrifices of Civil War soldiers.  The observation started in Waterloo, New York, west of Syracuse.

Because of a law passed by Congress in the year 2000, Americans are actually legally required to observe a National Moment of Remembrance at 3 pm on Memorial Day to remember and honor the fallen.

We here in Lake George have a great responsibility in the observance of Memorial Day because, although this day of remembrance was started just after the Civil War, the current occupiers of this landscape are encamped on the grounds of our nation’s very beginnings.  As we exploit this showpiece milieu for its’s recreational value, we, as citizens, feel the gravity of the efforts of conflict here.

No one who has come to this ceremony today needs to be told that a nation that does not remember its conflict history forgets itself, its sacrifices, its identity, and dangerously loses track of the effort that it takes to maintain its cherished qualities.

We stand here at the grave site of Unknown Soldiers recovered from road construction who fought in the famous French and Indian War battle – the Bloody Morning Scout – in 1755.  This history of this nation-building battle is best told by our historians and keepers of history who now occupy an important niche at the new Visitor Interpretive Center across the street.

The tombs and grave sites of Unknown Soldiers serve as a symbolic grave for all war dead whose remains have not been found or identified.  The Unknown Soldiers buried here played a part in our remarkable history, but also represent all the missing and unknowns associated with conflicts who served and not only gave their lives, but also gave up their identities in duty and in the on-going quest for freedom.

I was told years ago by a Colonial War historian that by some estimates, the war time events here have left an estimated five to six thousand of these unknown soldiers that are yet buried in unknown graves.

At Lake George, we literally walk on the graves of Colonial War soldiers who came to this far wilderness in the eighteenth century, and we later found them under roads, sidewalks, and numerous places where holes have been dug.

This is the kind of information that has inspired our community to recently undertake an Analysis of Military Campaigns associated with Forts George and William Henry.  This was a stand-alone historical study, completed in 2018, perhaps the only professional study ever initiated by our local government.

It was commissioned because during the 19th and 20th centuries as Lake George became a resort town, and an untold number of Colonial remains have been uncovered, and, for the most part, unfortunately, unrecognized.  This grave site of the Unknown Soldiers was one of the exceptions.

The study identified areas around town that were likely hot spots for colonial war activity and importance.  We know that Fort William Henty was there and Fort George was here, but there are other sites that were either miss-identified or unidentified, or lacked interpretation.

Shortly after this study’s focus on the Colonial Military Campaigns, an event of sheer synchronicity occurred.  In February of 2019, during the redevelopment of a village property, an unknown cemetery in Lake George village was uncovered.  It produced the remains of dozens of Revolutionary War soldiers.

Those graves of our first patriots were not automatically given the reverence they deserved.  That respect needed to be instilled in the actors involved with that site and within this community.

The point was made that we are going to be consistently better at respecting our first fallen military than we have previously been.  Those remains most reverently recovered by a team of volunteers led by New York State archaeologists on Courtland Street will be re-interred here – very near this memorial, further establishing our extraordinary history and their extraordinary sacrifice.  This place for reinternment is also being designed for the placement of colonial war remains that are yet uncovered, as redevelopment will inevitably continue to occur.

Henceforth, the unknown soldiers of Lake George will not be forgotten, dispensed with or unsung.” 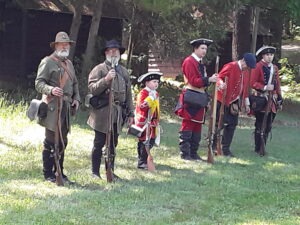 An honor guard from Fort William Henry attended the ceremony

A committee of local public officials, state archaeologists, historians, and others have been meeting and planning for the reinternment of these remains.  In addition to the Fort William Henry honor guard, the Lake George Fire Department and the Lake George VFW also had honor guards at the service. 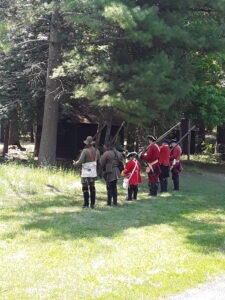