How Warren County youth supported the war effort in WWII

The move into World War II by the United States brought about many changes for this country’s citizens. The most important was in the lives of the sixteen million men and women who served during those years and of course the over four hundred thousand who gave their lives, making the ultimate sacrifice for their country.

Back at home communities coped with rationing of gasoline, sugar, tires, and other products to support the war effort. Other steps that both young and old in this country were asked to do was buy war bonds and collect scrap metal and rubber. Likely the most unusual item was the collection of milkweed pods, something desperately needed by the navy for life preservers. As we will see, the young people of Warren County stepped up and did their part to harvest milkweed and help protect the lives of servicemen and women. 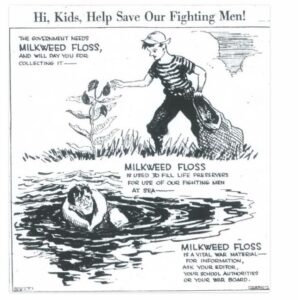 Only hours after Pearl Harbor, Japan attacked the Philippines and the American forces stationed there then. This successful invasion gave Japan control of the Dutch East Indies’ oil reserves and access to abundant raw materials in the region. One of these resources was kapok, a fiber obtained from the kapok tree that grows in the rainforests of Asia. The fiber, light and very buoyant, was used in life preservers by both the military and civilians.

As a replacement of this critical component of life vests was needed, the American industry began searching for likely alternatives. The most effective substitute was milkweed floss, with tests showing that a pound of this fiber would keep an adult afloat for over 40 hours. Milkweed was quickly given the status of a wartime strategic material and the government allocated funds for its collection and processing.

Soon the call went out to our youth to pick milkweed pods, with open mesh bags being distributed to schools in regions where milkweed was prevalent. In North Creek, bags were distributed to school children who quickly spread out across the area to collect pods. The North Creek News Enterprise on October 4th, 1944, praised these efforts saying, “It is pleasing to see the cooperation of our students in this project as the floss is used for life jackets which might be worn by former schoolmates.” In nearby Johnsburg, the nineteen students at the Sodom school collected and dried eighteen bags of milkweed pods during the Autumn of 1944.

In Minera, the Boy Scouts stepped up to collect milkweed floss for the war effort. With one-half million pounds needed to make life vests for the military in 1944, every bag picked was vitally important. The milkweed needed to be picked before they broke open and scattered the floss, leaving only a small window of opportunity to collect the pods. Once filled, the mesh collection bags were hung outside to dry, with two bags needed to fill one life vest.

Across New York State, members of local 4H clubs roamed roads collecting milkweed from fencerows and open fields. Their efforts paid off handsomely as they collected enough pods to produce 125,000 life jackets. Lifelong Saratoga County resident Marion Crandall shared this memory of that time while growing up in Bacon Hill, a farming community near Schuylerville:

In the orchard there were a lot of milkweeds… they needed kapok for the war…for life preservers…it was a 4-H project, so we went to the orchard, picked milkweed pods, and put them in big onion bags, mesh bags.

In many counties, it was the 4-H Club agents who oversaw the work of distributing the collection bags to local high schools. One example was Samuel B Dorrance the agent for Rensselaer County who passed out two thousand of these open mesh bags. In a newspaper account of his efforts, published in the September 15, 1944, Troy Record, he gave these instructions for collecting the pods:

When the seeds are brown, the pods are ready for picking but definitely not before, as they will mold, he said. “those in the northern part of the county are not yet ready. It isn’t necessary to examine each pod if a test shows that the majority of the seeds are ripe.”

He continued with the necessity of leaving the bags out to dry for at least two weeks, preferably hanging them from a fence at least a foot off the ground, after which they could be brought indoors.

With the close of the war in September of 1945, collection of milkweed floss was no longer necessary, and the program was ended. While it is impossible to count the number of lives that were saved through this work by the children of Warren County, what they accomplished was vitally important to the war effort and even now we can look back with pride at what they achieved.

Thank you to David Waite for this informative article.