WHISH of the SKATES

“Outdoor recreation is actually a process of recreating the body, spirit and mind.”

Ice sports have been a chilly aspect of the adventure of living in the North Country.  Some sports attract serious contenders with amazed spectators and other ice sports just provide refreshing exercise.  In years past there were many opportunities to skate, and, if a body of frozen water was not nearby, towns would flood fields.  We seemed to never get cold when enjoying an icy glide. Once your skates were tied up, it  didn’t matter if it was thirty degrees below zero!

Beyond the free form of skimming across ice, competitive sports such as hockey, figure and speed skating and even barrel jumping became popular.

Eskill Berg was an engineer at GE in Schenectady. As of native of Sweden, he was very familiar with ice and wind, and, in 1895, he introduced skate-sailing to his co-workers.  By 1916, this idea consumed a young man, John S. Apperson, who in turn found friends to brainstorm ideas to make sails and find places to practice.  One of their first sails was made from a quilt and then they moved onto muslin.  Bent on making the perfect sail, the men bought a sewing machine, ordered lots of fabric and began to design sails, sleeping bags and tents.  During the off-season, the guys were making as much as fifty sails a year in John’s Schenectady’s apartment.  (One can assume that John was not married).

In the winter they would travel by train up to Ballston Lake and eventually discovered Lake George.  Because of his new sport, John S. Apperson developed his skills to become an outdoorsman and a very dedicated conservationist of the Adirondacks.

John designed an innovative and faster sail to ride into the wind.  It was made from cotton and had a trapezoidal rather than traditional kite shape.  It carried 60 feet of sail, stayed to keep it taught and featured a detachable jib.  This popular sail came to be known as the Apperson, or Schenectady, sail.  It was easily assembled.  Resting it on the shoulder, twisting one’s hips into the right position, and then nestling into the sail, the skater skimmed over the ice at speeds off 40-50 mph if the wind was good and the ice is clear.  Of course, as with anything good in life, the skater had to be in the right place at the right time.  One had to be on location and be ready when there was a good wind and the ice was favorable.

The sail made by Apperson and Berg can still be crafted today, using their original design. If you desire to make your own sail, Modern Mechanix Illustrated, February, 1959, has a comprehensive article worth reading.  Sail material has transpired from blanket to muslin to dacron and nylon with poles of aluminum and fiberglass.  The early skaters were carrying up to 18 lbs. on their shoulders.

As with any sport, one needs to take preventive measures.  Lake George typically is fully frozen by the 3rd week in January, the coldest days of winter.  It is wise to skate with others; carry ice picks; wear flotation devices; and carry at least 50 feet of nylon line.  Ski masks protect your face from the wind and it’s not a bad idea to wear a hockey helmet. 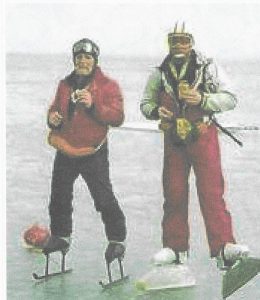 Skates need to be well- sharpened with long tubular blades working best.  As like the sails, over the years, skaters have developed different techniques, such as adjusting their height with removable stilts.  The adjusted height helps when wind conditions are mild.

This new winter activity did not exist only in Schenectady and Lake George; it  arrived in the early 1900’s in several other mid- Atlantic states as well.  The Skate Sailing Association was formed in 1922, and John Apperson was card carrying Number 2.  Today it draws most of its members from New York, New Jersey, Connecticut and Wisconsin.  The sport was quite popular up until the ‘40’s and during WWII.

Under the influence of William M. White, skate sailing had a comeback in the 1980’s. Bill was also from Schenectady and was an active skater, skier, and conservationist in the Adirondacks.   He, with his son, Peter, and friends such as Ted Caldwell, John and Deb Gaddy, David and Chris Gabriel (all Bolton natives), zealously pursued sailing the length of Lake George on their skates. 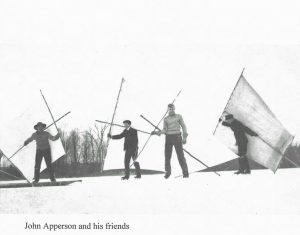 There are not many days between when the ice freezes thick enough after the first heavy snow. After a mild winter thaw, snow will melt off the ice and then, followed by a windless night of frigid weather, will refreeze the melted water into a perfect glass surface.  This is a rare occurrence.  One must be ready to go.  This is the day you “call” in sick”!  You are blessed!  The length of Lake George is yours!  Who else would be out there on the frozen ice in the freezing wind – and- oh, it is so quiet, peaceful and serene.

WHISH of the SKATES

This column was written by member and volunteer Eloise O’Neil for the Warren County Historical Society.