(Note:  City Historian Wayne Wright wrote an article on Christmas in the city for a Rewind article in December of 2010.  Using that as a starting point, he has embellished it and added a series of pictures to help us remember a Glens Falls Christmas.  We have added some photos from 2022 for this column). 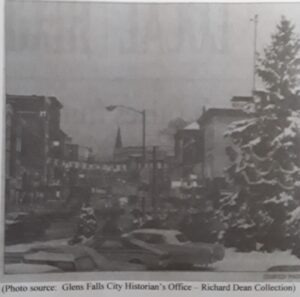 The above photo was taken on December 16, 1970 by Richard Dean, looking north on Glen Street from the Urban Renewal parking lot on the corner of Glen and Warren Streets.  The City’s Christmas tree remained at this location until the Burger King Plaza was completed in 1985.

The 1970 city directory lists no businesses on the south side of Warren Street, going east from Glen Street, as Urban renewal had purchased all of the buildings from Glen Street to Church Street.  On the north side of Warren Street, these stores were listed:  Mike’s Submarine Sandwich Shop, The Powder Box, David’s Shoes, Towart Studio of Photography, Kang Chow Restaurant, DelSignore Hotel and Italian-American Restaurant, Breslaws Discount Outlet and St. Mary’s Academy were all before Church Street 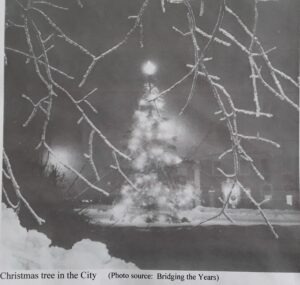 According to the recollections of those who did their Christmas shopping in downtown Glens Falls, each of the shop owners took pride in the Christmas wonders displayed in the windows along Glen, Ridge and Warren Streets.

The garland and Christmas lights that were hung from the street lights were furnished by the Glens Falls Chamber of Commerce and the City. 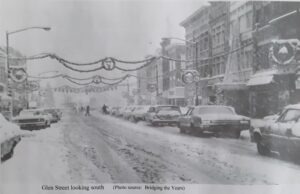 No memories of Christmas in Glens Falls would be complete without mentioning Donald Metiver.  Don wrote a newspaper column for the Post Star for many years including an annual Christmas column about Glens Falls of his youth.  He also provided many hours of entertainment with his Christmas memories that were broadcast on local radio stations during the holiday season.  You will find parts of two of his columns below.

Post Star for 12/18/1976  “Do you remember downtown at Christmastime?  The things that I especially remember start with the marvelous decorations that were always found on the front of Fowler’s.  Standing in Exchange Street and watching those great moving figures in the store windows, and Merkels was a major stop to view the decorations along with the banks.

Christmas music poured from the balcony at Braydon and Chapman’s in Bank Square and the city would put up some special decorations.  One year it was a Santa in a sleigh, then another year, someone had the bright idea of putting a church in the middle of the square.  It was pretty until about the 20th car hit it trying to get through the intersection. 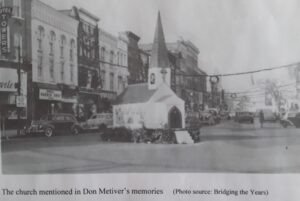 Fanny Farmer, remember how good that little place smelled?  They would fill the Glen Street window with chocolate Santa’s.  Boxer’s had windows filled with perfume gifts and the Sugar Bowl would put out ribbon candy.”

From another article:  Post Star for 12/1/1984 “Christmas is my favorite holiday and my favorite season.  Growing up in Hometown, USA meant each Christmas season I would be taken downtown to visit all the “toy lands.”  Every store would have a special section clearly marked as “toy land” where they would have the latest games, trucks and other toys waiting to be purchased.

The Tire Shop always had a great display of older kid’s toys; things like wagons, bicycles, baseball gloves, footballs and pedal toys like airplanes and cars.  There were the sleds, real sleds, like Flexible Flyers (How many of you still have your Flexible Flyer?  Mine is hanging in the garage waiting for someone to take it for a ride. WW)  Steiners, on Warren Street also had a great toy department.

Downtown was magic at Christmas.  The insurance company had two large trees on either side of the front entrance in Monument Square.  Merkel’s was all decked out and strings of lights went across all the streets and it usually snowed making the balsam wreaths on the stores even prettier.  Growing up in Glens Falls at Christmas is one of the memories I treasure.” 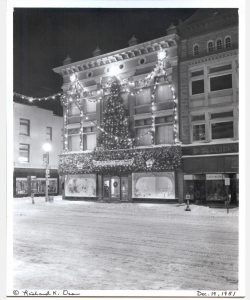 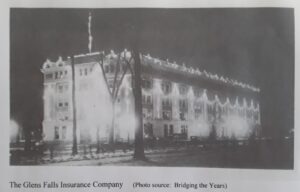 From 1980 through 1988, I had the pleasure of being part of the City’s Christmas decorations crew.  The color photos included in this Rewind were taken by Richard Dean in 1984 and are part of the City Historian’s ‘Richard Dean Collection.’  I feel that it is a compliment that Mr. Dean felt highly enough of our work that he would take these beautiful pictures of it.  It was one of the most rewarding parts of my job at that time. 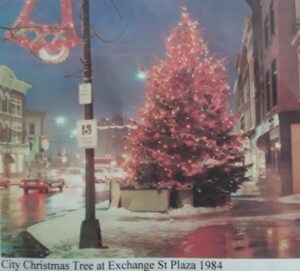 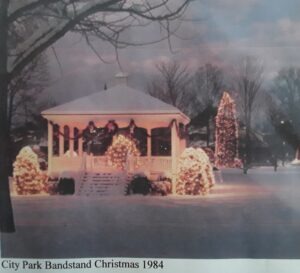 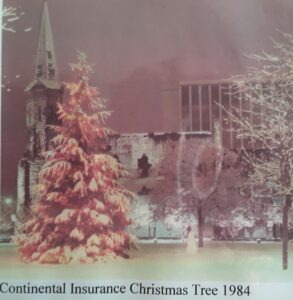 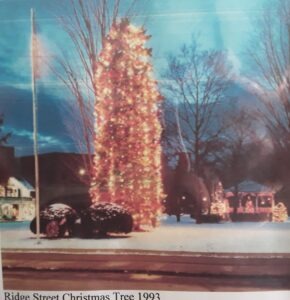 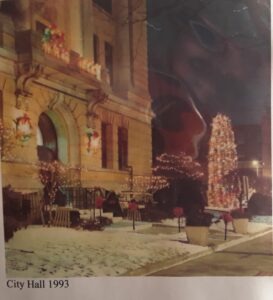 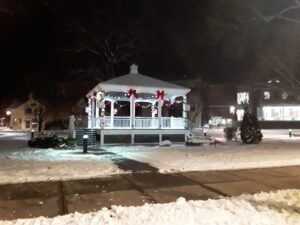 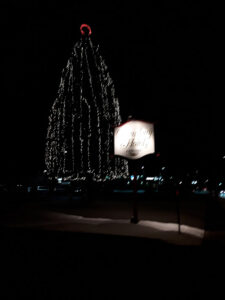 The tree outside the Queensbury Hotel 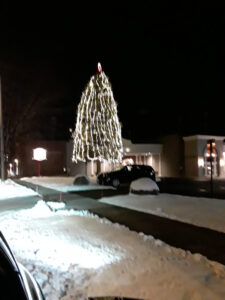 The tree from another viewpoint 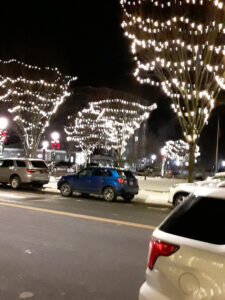 The lights in City Park 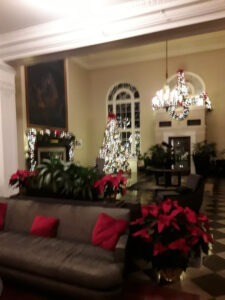 The lobby of the Queensbury Hotel

The Grinch is checking into the hotel 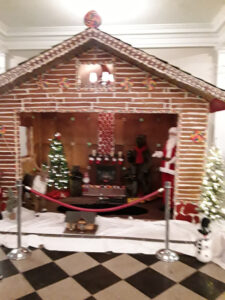