It is always important to  share this ‘local’ story at Christmas.  Warren County, NEW YORK, certainly made a splash in Washington, D.C., not only once, but twice! 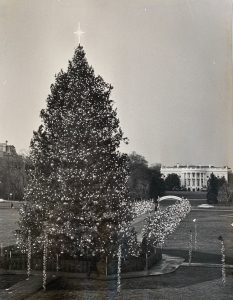 In 1923, President Calvin Coolidge walked from the White House to the Ellipse to light a 48-foot fir tree decorated with 2,500 electric bulbs in red, white and green, as a local choir and a “quartet” from the U.S. Marine Band performed.  Ninety-eight (98) years later, this American holiday tradition continues to bring citizens together to share in a message of hope and peace.  This first National Christmas Tree was from Coolidge’s native state of Vermont, and was donated by Middlebury College.

Since 1923, the National Park Service selects trees from around the country.  The idea for a tree from Warren County came from Robert E. Hall, founder of Adirondack Life magazine.  He figured that it would be great publicity if a tree from our region ended up on the White House lawn.

The Adirondack Lumberman’s Association initiated the effort to find a tree that met  the requirements of the National Park Administration – at least 60 feet high and symmetrical.

They found a winner!  Douglas Luke came up with a 72 foot spruce on a dirt road on the edge of the Chestertown town dump.   Washington’s inspectors approved and George Calloway of Argyle undertook a regular routine of pruning, spraying, and fertilizing.  His efforts continued for two years.

Hundreds of people attended and celebrated on November 27, 1964 as the tree was cut in the woodlot.  Using a chainsaw, State Assemblyman Dick Bartlett ripped through the trunk and the tree fell onto a truck bed.  A little four year old girl, Andrea Cushman, came forward and ceremoniously placed the first ornament on the tree, a red satin bulb.  Fort Edward Express trucked the tree to Washington where it was decorated with 5000 red, white and gold lights.  On December 18, 1964, President Johnson threw the switch to light the tree.

Five years later, a second Warren County tree went to the White House while Richard Nixon was President.  In 1969, local resident Walter Grishkot found a Norway spruce in Crandall Park.  It was cut on November 22, 1969 and journeyed to Washington, DC with a State police escort.  This tree came with DRAMA.

Mr. Grishkot hired 200 Adirondack College students to “guard” the tree from souvenir hunters and anti-war protesters.  In 1969, the Vietnam War was not popular and it was feared that unruly people would destroy the tree to make a “statement.”

It made the journey to Washington and President Nixon, on December 16, 1969, threw the switch and 9000 red and white lights adorned this beautiful Warren County  Norway spruce.

Now, there was more “DRAMA” as President Nixon told the crowd and the country, that this tree was from Warren County, OHIO!

Mrs. Joan Grishkot attempted to correct the President but he did not acknowledge his mistake.

The next morning the City of Glens Falls received tremendous publicity as Walter Grishkot, for  7 1/2 minutes,  appeared on the “TODAY” show with Hugh Downes and Barbara Walters.  The NY Daily News ran a story in its December 18th edition with the following headline: “Nixon, You Sure Know How to Hurt a Small Town.”

Regardless of Nixon’s gaffe, people in Warren County and Glens Falls were very proud of this tree which had been planted before WWI.

This tree was sent to Washington to share in the nation’s spirit of goodwill and peace.  The whole affair was a cumulation of effort on behalf of many students and citizens.

This article was prepared by Eloise O’Neil, new Trustee and Resource Room Director for the Warren County Historical Society. 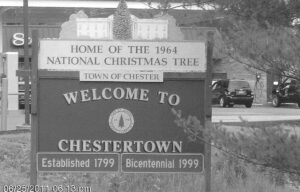 There is a wall display case in the Warren County Municipal Center with artifacts from the 1969 tree. 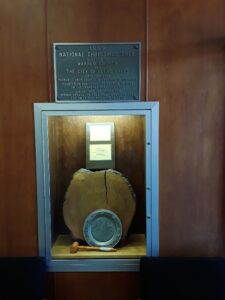 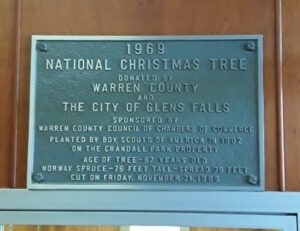 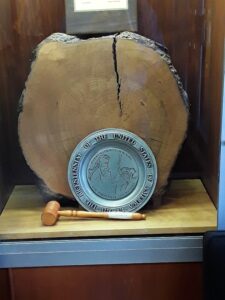