Harriet Rogers of Glens Falls, a centenarian and one of the most valued members of the Warren County Historical Society, recently shared two delightful memories with us

“I found this cute little postcard and story (from The Warrensburg-Lake George News, April 14, 1977) among my aunt’s papers.  She was forever clipping articles such as this one.  My aunt, Maude Pitkins, was born in 1890.  In 1922, she moved to Pottersville and resided there the remainder of her life.  She operated a four-season resort on the Stone Bridge and Caves Road on the outskirts of Pottersville.”

This lovely card, owned by a Pottersville lady, was mailed in 1911 for one penny. 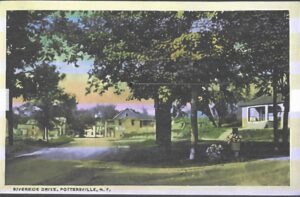 “I recall childhood memories of a spot on old Route 9, between Warrensburg and Chestertown, known as “The Devil’s Kitchen.”  Route 9 was a corridor for rum runners [during Prohibition] and, purportedly, that spot was a layover.  I remember as a child being scared as we passed the spot that the Devil would pop out and grab me, so I hunkered down on the floor of my father’s 1922 Dort  open touring car until my father announced all was clear.”

Prepared by Teri Rogers for the Warren County Historical Society.