We are back!  While the new website was being developed, and with the problems we experienced from the May storm as well as the Pandemic, we had to take a break.  It is our intention to start producing our regular Rewind column again on or about the first and 15th of the month.  If anyone has an interest in researching and writing about local history, please contact us at 518-743-0734.

South Street School, Glens Falls, New York at one time was located at the intersection of South and West (now Broad) Streets

From the early days of development, there were many private schools and academies in Glens Falls.  As schools were formed, they were generally small one and two room buildings.

A brief time line looks at one particular school in the city:

1785:  the New York State Board of Regents was created

1786:  The Act of 1786 provided land reserved one section of land in each township for “gospel and schools” and promotion of literacy

1795:  The Act of 1795 ‘encouraged’ schools.  Common school districts were established in Warren County

1812:  The Act of 1812 required all counties to maintain elementary schools within walking distance for all pupils.

1823:  Glens Falls was divided into three separate districts, each with a one-room school house.

District #2 had a one-room school at 93 Ridge Street.

District #18 had one on the corner of Warren Street and Oakland Avenue.

District #20 was located at the corner of South and West (now Broad) Streets that was known as South Street  School.

South Street School, District #20 was at the South Street and West Street (now South Street) and Broad Street intersection started life as wood building erected circa 1823.   After 40 years, it was eventually declared unfit for school purposes.  A two-room, one-story brick building, 70’ X 35’ was erected in 1864 by George Conery for $1,400.  Another two-room wooden building at 107 Park Street was used to relieve overcrowding at the South Street building. 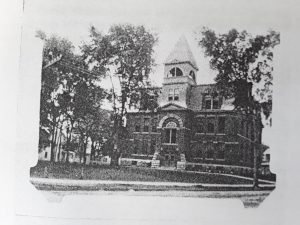 1882:  Trustees recommended that a new eight-room school building be constructed on the site of the South Street School.  It was put to a public vote and failed, 495 nays to 189 ayes.  [The vote against the proposal may have reflected the location of the South Street/West Street location, considering it an undesirable spot for a school in the city.]

A teachers’ committee reported at the time, in the three primary schools in the district (Glen Street, South Street, and Park Street Schools) there were four rooms, five teachers and 459 pupils – 67 pupils-per-teacher.  Severe overcrowding was due in part to the “canal pupils” who came in the winter.

1890:  citizens approved erecting a new building on the South Street site, 495 for, 110 against.  The twelve room, three story brick building had toilets in the basement! 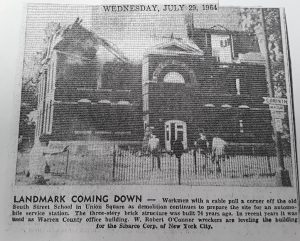 1964:  The old South Street School was razed to make way for a service station.