The Battle of Lake George

We were visiting the Lake George Travel Guide, “The Original Vacation Is Calling!,” that the Warren County Tourism Department put out for visitors to the area for the 2020-2021 travel season.  In it, Paul Tackett wrote a very interesting piece on the Battle of Lake George.  We asked for permission to repeat it here.  Because it is rather lengthy, we will reproduce it in two columns.  Enjoy a refresher on some of the most important events to happen right here in Warren County.

The Rest of the story… 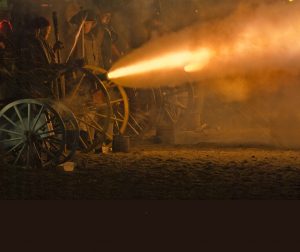 But the guns would not be silent for long with so much at stake between French Canadians, British Colonials and their Indian allies. The British had shown they could ultimately fend off an attack by superior numbers, but with no batteries or cannon deployed by Dieskau in 1755, had the French thrown all their weight into the Battle of Lake George? Two years would pass, hostilities would once again reach a boiling point, and in July 1757, with lessons learned, a massive force of roughly 8,000 men marched south under renowned French General Marquis de Montcalm. Consisting of 3,000 French troops, 3,000 Canadian militia, 200 artillery and 2,000 Indians made blood thirsty by promises of great plunder, a truly formidable force was now descending Fort William Henry.

In the time following the Battle of Lake George, the British Colonials had reinforced Fort William Henry and maintained a substantial presence in the southern basin. British General Daniel Webb had quartered an adequate number of troops to fight off Indian attacks, but the garrison was in no way outfitted to defend against the massive force making its way south. General Webb escaped to the protection of Fort Edward and left 2,500 soldiers under the command of Col. George Monro to hold the fort. With only enough room inside the walls for a quarter of that number, a majority of defenders would camp and fight beyond protection of the ramparts.

In August, Montcalm arrived in Lake George and situated his forces just northwest of the fort, on the elevated ground behind where the Lake George High School sits today. The siege of Fort William Henry began with a methodical barrage from French artillery into the reinforced log and earthen walls of the garrison. Montcalm’s forces slowly inched southward, launching sortie after sortie to weaken the defenses and to get their heavy firepower into position for the coup de gras. Most of the British defenders fought furiously while encamped outside William Henry’s protective walls. Exposed to the relentless cannon fire, they were eventually slaughtered and buried in the shadows of the very bastion they defended.

A French victory was within grasp, but not quite a forgone conclusion. With supplies and ammunition running short, Montcalm may have been forced to abandon the siege and withdraw … were it not for a stroke of good fortune. That came in the form of an intercepted communique from Gen. Webb in Fort Edward to Col. Monro. The message conveyed that reinforcements would not be dispatched to Fort William Henry and that Monro should prepare to surrender his post. That intelligence was quickly passed from Montcalm to Monro under a flag of truce, and the British commander proceeded to draw up terms of surrender. Among the conditions agreed to by Montcalm was the safe passage of Monro’s people back to Fort Edward.

Only two days after the Marquis de Montcalm arrived at the gates of Fort William Henry, he took possession of it. The British Colonial forces, consisting of soldiers and civilians, gathered up the few belongings and light armaments they could carry, and prepared for the next morning’s early start down the Fort Edward road to safety. After all, warfare in the 17th century was a civilized affair, and the ragged assembly could count on Montcalm to keep his word.

In the meantime, the French-allied Indians had been fuming over the lack of plunder that had been promised them. As the defeated forces began their slow march south, Indian anger and desire for vengeance reached a boiling point. And despite French attempts to stop it, a slaughter of the innocents ensued as hundreds of men, women and children were shot, scalped and beaten to death by frenzied Indian warriors. The few who survived the carnage were eventually escorted to Fort Edward under the protection of French troops and although the exact number of slain is a subject of debate, there is no doubt that a massacre was carried out within view of today’s Battlefield Park. 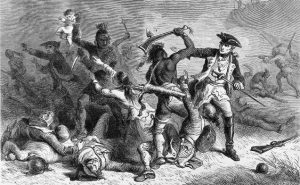 As the Marquis de Montcalm inspected his battered prize, Fort William Henry was prepared for destruction. The general had executed a textbook assault on his enemy, winning the day and delivering retribution to the English Colonials for the French loss in the 1755 Battle of Lake George. This one had been a bloody affair and an appalling conclusion to an otherwise noble fight, but control of North America was still yet to be decided. And as the remaining war-weary French contingent set sail north from the southern basin of Lake George, the majestic Fort William Henry burned to the ground.

Of course, this fort would be rebuilt and an even more ambitious stone garrison, Fort George, would be commissioned on the grounds of today’s Battlefield Park. But nothing occurring in the subsequent history of the Lake George Area would compare to the crucial role these colonial battles played in determining the course the entire continent would take. Hanging in the balance at that time was the very fate of all the players – nations and peoples – who wagered their fortunes, their futures and their lives right here on the sacred grounds of Lake George. They endured unimaginable hardship in an untamed wilderness so that one day perhaps their children could live peacefully and enjoy the stunning beauty that has endured here from time immemorial. 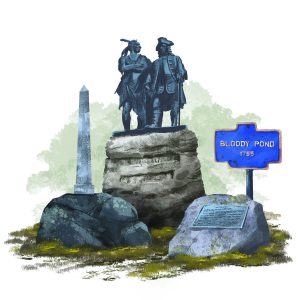 Certainly they could not foresee that their sacrifices would not be made in vain and that the Lake George Area would evolve from battleground into playground; that it would welcome millions of people from around the world year after year to enjoy the beauty of our natural surroundings and the one-of- a-kind vacation wonderland that has been created to embrace them.

We want visitors to enjoy our incredible hotels, restaurants and attractions and indulge in the vast number of activities that could easily fill a whole summer. And when it’s time to rest up for the next day’s excitement, we invite them to consider a peaceful walk around the hallowed grounds of Battlefield Park or a visit to the solemn memorials placed reverently around our area. We invite them to reflect on those silent connections to our past. They lie all around us. We know this because history breathes here.

We would like to acknowledge the Warren County Tourism Office for their willingness to let us reprint this material from the Travel Guide, “The Original Vacation is Calling!,” as well as Paul Tackett, Assistant Tourism Co-Ordinator, for writing the piece.  For additional information:  VisitLakeGeorge.com. 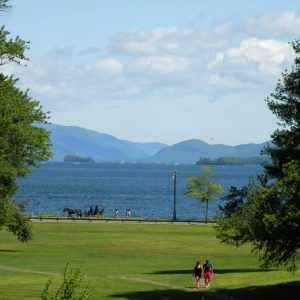 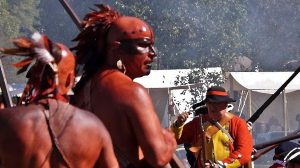