Today there are at least four breweries within a short distance of downtown Glens Falls, each offering unique microbrews to their loyal customers. Looking back 150 years, we find that the first brewery to make ale in Warren County, the Glens Falls Ale Company, was only a short walk from a number of these newer downtown establishments.

The brewery was established in 1866 by George Conery and Daniel Ferguson on a half-acre parcel on South Street in Glens Falls owned by Edward Tracy. In 1869 George Conery’s wife, Ann, and Westel W. Hicks purchased the property from Tracy for nine thousand dollars. Over the next four years, Conery’s partners changed twice, first when Ferguson sold out to Hicks, who then, in turn, sold his part of the partnership to John Aikin Sheldon.

The brewery started as a small operation producing fifteen barrels of ale a day, almost all of which was sold locally in Glens Falls. By 1877 the brewery had increased production to thirty-five barrels a day of cream and stock ales, with their product being shipped as far as Plattsburgh, New York, and Burlington, Vermont. 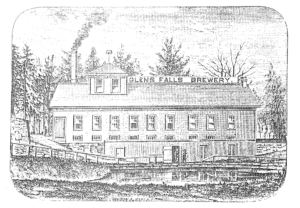 From the time the brewery had been established, Englishman John W. Knight had managed the business. Knight was born in Devon, England in 1827. In 1852 he married Isabella Patteson in Derby, England, and by 1858 he and his wife had moved to Canada where their first child, Emily, was born. In Canada, John was employed by Molson’s Brewery, with some sources noting that John had been invited to Canada specifically by Molson to work in the business. The family’s stay in Canada was brief, as when their second child, James, was born in 1861, they were already residing in New York.

In 1884, John Knight purchased the Glens Falls Brewery property for ten thousand dollars. Knight enlarged the business by building a four-story brick building on the site. At its peak, the brewery produced 25,000 barrels a year and employed eight men. Their signature brew was “Glens Falls Ale,” which soon became one of the most popular ales in the northeast part of New York. By this time John Knight had brought his son, James H. Knight, into the business as well.

In 1910, John, now a widow at the age of 83, and his 49-year-old son James were living together in the family home adjacent to the brewery on South Street. John died the next year and was buried in Glens Falls Cemetery. After his father’s death, James continued to operate the brewery and was an active part of the local business community serving on the board of directors of the Glens Falls National Bank. James Knight was also the president of the Warren County Bicycle Commission, a county organization that oversaw the building and repairing of cycle paths.

In 1918 the main brewery on South Street burned, gutting the interior of the building. Lost in the blaze were 2,000 barrels of malt and hops as well as other supplies used in the ale brewing process. Fortunately, the barrels of ale that were stored in the basement were not damaged. The loss was estimated at $50,000 with little insurance coverage on the goods and property. While at the time of the fire the owners were undecided about rebuilding, the enactment of Prohibition in 1920 which banned the sale of intoxicating liquors ended any opportunity to immediately reopen the business. The remaining equipment was finally sold in the early 1920s.

There is no record of how long the building stood idle, but by 1932 it was being used as a furniture warehouse by the Rochester Furniture Company. In March of that year, a “Brewery Warehouse Sale” was advertised in the Glens Falls Times, offering closeout prices as low as $49 for any of the “Living Room Suites” still in stock.

By November of that year, the Knight brewery building was being renovated with anticipation of the end of prohibition. James Knight, the owner of the property stated that he did not intend to operate the plant but was in negotiations concerning the sale.

When Prohibition was ended in December of 1933, a group of investors from Binghamton, New York chartered the Glens Falls Brewery Corporation in expectation of purchasing the old brewery building from the Knight family. By the end of that month, the deal was completed, and preparations were being made to reopen the plant.

The new corporation did not get far in developing the property, and the brewery was never reestablished. Within a few years, the property was purchased by Joseph Yanklowitz, who used it to store wastepaper. On November 1, 1940, fire again struck. The next day’s Albany Times Union reported the blaze in an article that began with “Flames which cast a glare over a wide area last night destroyed the old Glens Falls Ale company brewery building.” The next morning three walls were all that remained of this well-known landmark, the first and likely the most productive brewery in Glens Falls history. Today Glens Falls Hospital sets on what was once the brewery property.

The illustration of the early brewery is from John S. Bulkeley’s 1877 book, Leading Industrial Pursuits of Glens Falls, Sandy Hill, and Fort Edward. The Rochester Furniture advertisement is from the March 8, 1932, Glens Falls Times.

Researched and written by our friend, David Waite, for the Warren County Historical Society.