We were visiting the Lake George Travel Guide, “The Original Vacation Is Calling!,” that the Warren County Tourism Department put out for visitors to  the area for the 2020-2021 travel season.  In it, Paul Tackett wrote a very interesting piece on the Battle of Lake George.  Paul is Assistant Tourism Co-Ordinator for the Warren County Tourism Office.  We asked for permission to repeat it here.  Because it is rather lengthy, we will reproduce it in two parts, the second posted on April 15th.  Enjoy a refresher on some of the most important events to happen right here in Warren County.

The Story of the Battle of Lake George 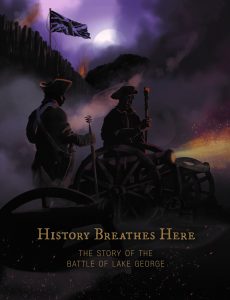 We know this because it is everywhere in Lake George. This is not only a historic place made famous by long-ago battles, it is ground made sacred by the people who bore witness to the tragedies and triumphs.   Silent connections to our past, they make themselves known to this very day, as new colonial-era graves are excavated within sight and sound of bustling Lake George Village.  History is part of the fabric of Lake George and the reminders lie all around us.

Christened “Lac Du Saint Sacrement” by French Jesuit missionary Father Isaac Jogues in the 1640s, our Lake George would become essentially Ground Zero in the European powers’ fight for dominance in North America.  The players?  France and England. The stakes?  Whether a future American people would speak English or French. 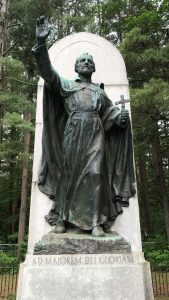 Early in the 17th century, the British were busy experimenting with colonies on the eastern seaboard of the New World while the French were establishing settlements in what is now Canada. But French interests really extended much farther to the south, and with the English asserting claims ever farther north and west, dispute was inevitable.  Add to this mixture the original occupants of the land struggling to hold onto their diminishing ancestral territories, indeed their own existence, and you have a cauldron ready to boil over in conflict.

The French and British would each curry favor with the native tribes, befriending their chiefs and enlisting Indian warriors to bolster their military ranks. In protecting these early claims, there would be incursions and skirmishes, advances and retreats, treaties signed and treaties broken.  This ebb and flow of power would continue until the mid-18th century, when the lines would finally be drawn for an epic wilderness battle at the southern basin of our beloved Lake George.  More and more European treasure and troops would pour into the region; more and more blood would pour out.

But there is a decidedly human factor for us to consider, too.  It wasn’t only soldiers occupying the wilderness fortress and surrounding encampments at the southern tip of Lake George.  It was a community of men, women and children of all ages, living a daily existence on a rugged, unforgiving frontier.  They foraged for food, toiled over sparse crops, slaughtered their livestock, prepared their meager meals, raised their children, tended their sick, made due with stark provisions, buried their dead … and struggled constantly.  This, all happening amid a suffocating, putrid stench brought on by confined living and dying that diminished further an already wretched existence.  Most, of course, would meet tragic fates as victims of disease and malnutrition during relative peace, and some victims of a horrendous massacre in wartime. They were just like you and me, and they died right here on this small patch of hallowed ground in the Lake George Area.

In the years leading up to the French and Indian War, Crown Point would become the pivotal stronghold of the French in their forays south.  Located in the strategically significant southern extreme of Lake Champlain, near the entrance to Lake George, this was for the French a “line in the sand” … for the British, a menace to be reckoned with.  In 1755, the first of three significant engagements, collectively called the Battle of Lake George, came by way of British Commander General William Johnson’s march from Albany via Fort Edward with an army of Colonial militia and volunteers in a planned assault on the French controlled Ticonderoga and Crown Point.  Upon arrival at Lac Du Saint Sacrement, Johnson renames it Lake George for his sovereign, King George II, and commences construction of a fortress he names for the king’s grandson, William Henry.  The body of water and the bastion that overlooks it have retained those names ever since. 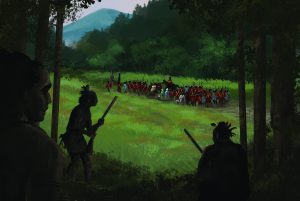 While the British and Colonial forces are readying themselves for the planned march on Crown Point, another familiar historical figure, French General Baron de Dieskau, has learned of the attack plans and has marched south with a French army of 3,500 regular, militia and Indians.  He fortifies Crown Point and heads to Fort Edward with diminished numbers in an attempt to cut off supply lines and crush Johnson’s campaign before it can begin.  A full garrison at Fort Edward, however, forces a Dieskau withdrawal back to the north for a direct assault on Johnson’s encampment where today’s Battlefield Park sits. 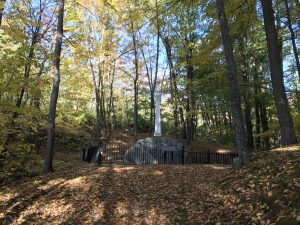 Having learned the whereabouts of the French forces, Johnson orders what would become known as the “Blooding Morning Scout.”  He sends Colonel Ephraim Williams with his army of more than 1,000 troops and 200 Indian warriors, led by Mohawk Chief King Hendrick, to meet the threat.  Dieskau is informed of this movement by his scouts and immediately sets up an ambush not far from William

Henry itself.  Premature fire by Dieskau’s Indian forces alerts the British Colonials of their entrapment, but it was too late.  When the smoke cleared, both sides had suffered substantial losses and Colonel Williams and King Hendrick had fallen in battle.  An obelisk monument is placed at the site where Williams fell on Route 9 just south of the Leather Outlet of Lake George.  Having lost their commanders, it appears to be a British rout when their forces make a frantic retreat back toward the fort.  A walk or ride down the bike path from the village will carry you to the site of this ambush.

Somewhere in the vicinity of today’s Battlefield Park, the exhausted retreating British Colonials regroup to make a final stand against their pursuers.  They put up a furious fight against a further-diminished French contingent before being forced to flee toward the safety of the encampment.  Hearing all the gunfire from these engagements gives Colonel Johnson the time he needs to put his garrison on alert and to field his cannon.  During this, the second engagement in the Battle of Lake George, a brutal barrage falls upon the advancing French and succeeds in stopping them in their tracks, leaving Dieskau himself severely wounded and abandoned by his fleeing forces.

The third and final phase of the hostilities would come later that day as a party of French and Indian deserters from the second engagement camps along Rocky Brook, just south of today’s village (a New York State Historical marker and plaque can be viewed at the site near Sushi Yoshi across from Riley’s on Route 9).  Colonial reinforcements, including a young Robert Rogers, en route to Lake George from Fort Edward come upon them and proceed to massacre them to the last man.  The legend lives on that the butchered corpses were all tossed into a nearby pool of water, turning the surface red and leaving it the gruesome name “Bloody Pond.”

Markers at the Bloody Pond site

Thus, when the day closed on September 8, 1755, multiple engagements had left a staggering number of dead and dying men on the shores or within view of beautiful Lake George. And though they barely eked out a desperate defense of hearth and home, Colonel Johnson’s ragged, exhausted forces would claim a hard-fought victory that summer in their campaign against the French in the bloody Battle of Lake George.

Information for this column was a compilation drawn from many sources.  We will provide a bibliography after we post Part 2 on April 15th. 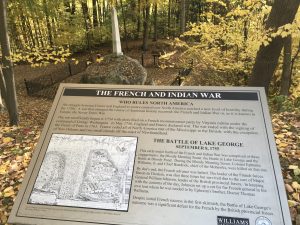 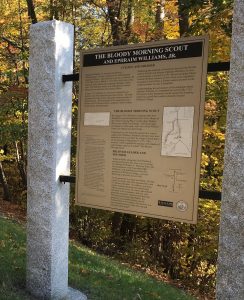 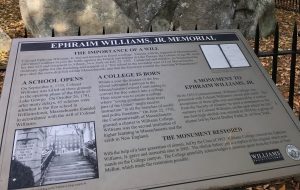