On July 24, 2020 I published an article about the Brown Swan Club at Schroon Lake.

I recently received an email from John Iacovino of North Carolina who sent some digital photographs of an orchestra called “The Original University Syncopated Orchestra” of Boston, Massachusetts.

John’s father, Louis Iacovino was the drummer for the orchestra third from left in the photo.

In the early part of the Roaring Twenties, Philip Rice, owner of the Brown Swan Club, hired the orchestra to perform at the club in Schroon Lake. 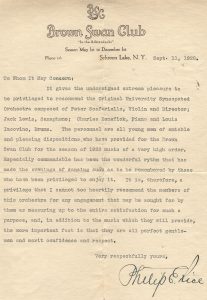 At the end of their summer engagement, Philip Rice gave a reference letter to the orchestra  commending the Original University Syncopated Orchestra stating “in addition to the music which they will provide, the more important fact is that they are all perfect gentlemen and merit confidence and respect.”

Note: All photographs were taken at the Brown Swan Club.